‘Act of God’ coverage for cars up due to floods 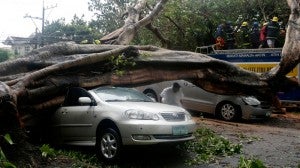 Firemen remove the branches from a fallen tree which fell on two cars at the onslaught of  a typhoon. AP FILE PHOTO

MANILA, Philippines—As widespread flooding has virtually become the new normal when it rains, with or without a typhoon, more and more motorists are availing themselves of the so-called “Act of God” coverage for their vehicles, according to the Philippine Insurers and Reinsurers Association (Pira).

“When in the past we have only around 20 percent of vehicles with Act of God coverage, now we can say we have 60 to 70 percent,” Pira deputy chair and spokesperson Michael Rellosa said in an interview over the weekend.

Rellosa attributed the swelling number of vehicles insured against floods under Act of God or Act of Nature coverage to the heightened awareness of such risks in the aftermath of Tropical Storm “Ondoy,” which hit Metro Manila on Sept. 26, 2009.

Most remembered for cutting a swath of destruction that left nearly 500 people dead and over P11 billion in damage to real property, farms and infrastructure, Ondoy’s flash floods also damaged an estimated 14,000 motor vehicles in the capital alone.

“Ondoy was a wake-up call. Filipinos are now are more conscious of the risks they face,” Rellosa said.

The 2009 calamity had since become an unofficial yardstick in assessing the impact of subsequent storms, like Tropical Storm “Mario” which hit Luzon provinces and paralyzed Metro Manila on Friday.

Besides flooding, an Act of God coverage also insures a vehicle against earthquakes. It would cost car owners an additional premium of 0.5 percent of the vehicle’s market value.

Despite the added cost, Rellosa said the number of vehicle buyers who avail themselves of Act of God coverage, on top of the traditional comprehensive car insurance, more than tripled last year from pre-Ondoy levels.

“An Act of God cover continues to be an add-on coverage, but banks and other lending institutions have made it compulsory for those who are buying cars through financing,” the Pira officer added.

Last year, vehicle sales in the country reached over 210,000 units. The auto industry expects sales this year to hit a record 250,000 vehicles amid a growing economy.