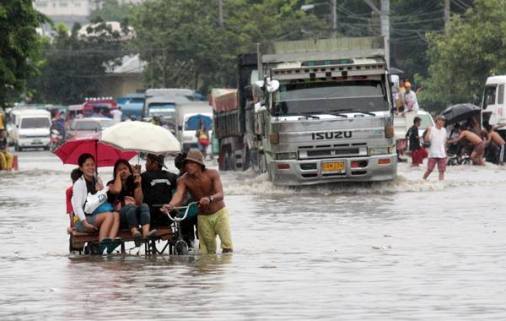 A pedicab driver transports people to the other end of the flooded road. CDN/JUNJIE MENDOZA

CEBU CITY, Philippines—Classes were suspended in all towns and cities in Cebu while thousands of passengers heading to work were stranded when rains brought by tropical depression “Mario” caused metro-wide flooding.

The state weather bureau Pagasa warned of heavy rainfall in the Visayas.

Tropical depression “Mario” is gaining strength with maximum sustained winds of 65 kilometers per hour and gusts of 80 kph. “Mario” is taking a west northwest track at speeds of 28 kph and was last spotted 460 km east of Cataran, northern Samar. 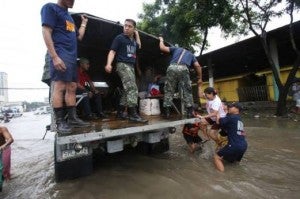 Baltz Tribunalo of the Provincial Disaster and Risk Reduction Management Office reported landslide incidents in Transcentral Highway at the boundary between Balamban town and Cebu City.

Boulders covered one lane of the transcentral highway. Another landslide also hit barangay Manipis in Talisay City and is declared impassable. No one was reported hurt.

Several residents living near riverbanks in northern towns of Borbon and Bogo were evacuated as rivers in the towns overflowed.

In Cebu City both the North Reclamation Area (NRA) and South Road Properties (SRP) were flooded as waters reached knee-deep level, the same with the downtown area especially in Colon street.

Some roads including areas in Tipolo, Banilad, Plaridel streets in Mandaue were impassable due to heavy flooding.

At 5 a.m. a building of the Southwestern University in Cebu City was reportedly hit by a tornado.

The roofs of seven classrooms of the university’s Maritime Regiment were blown off.