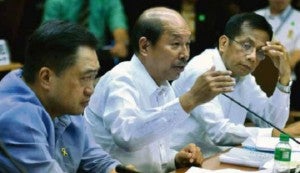 MANILA, Philippines – Budget Secretary Florencio “Butch” Abad on Thursday said that while he understood that “fighting for the welfare of [the] country is often an emotional and passionate pursuit,” it should not result in “violence and aggression.”

Abad released the statement, a day after he was mobbed by student activists, led by the organization STAND-UP, at the University of the Philippines (UP) in Diliman.

Abad said those opposing the government should instead engage in peaceful dialogue.

“The behavior that STAND UP showed was therefore very disappointing. Ideally, we should be able to engage each other in frank, sober discourse,” he said.

“I wholly understand that fighting for the welfare of our country is often an emotional and passionate pursuit. But there is no place here for violence and aggression, and especially not in an academic environment.”

Abad added: “All that a mob wants is to harm its target, never mind truth or propriety; beyond that, it stands for nothing else.”

The Secretary, who has been credited for crafting the Disbursement Acceleration Program (DAP), said he was invited by the student council to talk about the national budget during a forum at UP.

“I gladly accepted this invitation, as the UP Student Council had already asked me to participate in a previous budget forum that proved very fruitful. I also wanted to take the opportunity to reach out to the students of UP Diliman, especially since they’ve taken a very active role in demanding better governance from the Philippine bureaucracy,” Abad said.

As he prepared to leave, however, protesters started gathering outside the auditorium.

“I said I was prepared to address their concerns. Once I began approaching the STAND UP group, however, the protesters—who were around 50 to 60 strong—did not engage me in dialogue,” he said.

“Instead, they surrounded me aggressively as I made my way towards the vehicle. I had objects thrown at me, and one student even attempted to grab me by the collar.”

A video released by some of the protesters showed students carrying placards, calling Abad “magnanakaw (thief).”

Charlotte France of STAND-UP, a political organization of UP students, said Abad was not welcome in the university because of his involvement in the DAP, which they called presidential pork.

She said Abad and President Benigno Aquino III should be held accountable for their alleged “crimes.”

The DAP is the controversial program under the Aquino administration, which was later declared partly unconstitutional by the Supreme Court. Critics claimed that it was used to bribe senators into voting against former Chief Justice Renato Corona.