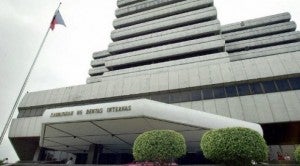 In a 13-page ruling, the P1.23-billion tax due was supposedly for the importation of equipment and supplies for the construction of the Ninoy Aquino International Airport (Naia) Terminal 3.

The appeals court’s 15th division through Associate Justice Pedro Corales reversed and set aside the writ of preliminary injunction issued by Branch 114 of the Regional Trial Court of Pasay City on June 16, 2010, preventing the BIR from issuing final assessment notices (FANs) and further issuing assessment notices on its importation of capital equipment, spare parts and raw materials.

BIR went to the appeals court after the Pasay Court dismissed the argument of the BIR that it was the Court of Tax Appeals that has jurisdiction over the case.

The lower court said the CTA’s jurisdiction covers on only final decisions of the BIR involving disputed assessments, refunds of internal revenue taxes, fees or other issues pertaining to the National Internal Revenue Code (NIRC).

With regard to Piatco’s entitlement for injunction, the trial court held that the firm managed to present evidence that grave and irreparable injury would result if the injunction is not issued.

The appeals court agreed with the BIR that the lower court has no jurisdiction over the issue.

It noted that the issues raised by Piatco in its petition for prohibition against the BIR’s imposition of VAT on its importation are governed by the NIRC.

“Even if we assume that the BIR committed grave abuse of discretion amounting to lack or excess of jurisdiction in imposing VAT deficiencies on Piatco, which must be restrained by the extraordinary writ of prohibition, such cause of action still falls within the exclusive jurisdiction of the CTA and not the RTC,” the appeals court said.

It further added that Piatco failed to exhaust legal remedies when it immediately questioned before the RTC the preliminary assessment notices (PANs) issued by BIR instead of waiting for the FANs, which can be subject of an administrative protest and later an appeal before the CTA.

“Such premature invocation of judicial intervention is fatal to Piatco’s cause of action. A litigant may not simply go around the authority of the concerned administrative agency and directly seek redress from the courts,” the appeals court said.

“Rather, the party with an administrative remedy must not only initiate the prescribed procedure to obtain relief, but also pursue it to appropriate conclusion, in order to give the administrative agency an opportunity to decide the matter itself correctly,” it added.

The appeals court also did not give credence to Piatco’s claim that it was deprived of its right to due process by the BIR.

It noted that based on the records, Piatco was given and made use of every opportunity to air its concerns and refute the preliminary assessments.

“In refusing to dismiss the Piatco petition and proceeding to grant the WPI despite tge overwhelming evidence of its lack of jurisdiction, the RTC committed a patent and gross evasion of duty or to act in contemplation of law,” it further stated.

Concurring with the ruling were Associate Justices Sesinando Villon and Florito Macalino.