99 percent of police forces are doing their jobs well—Roxas 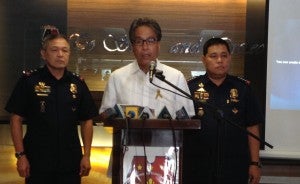 MANILA, Philippines—‎Interior Secretary Manuel Roxas II defended the Philippine National Police (PNP) on Wednesday, saying that 99-percent or the “overwhelming majority” of the police forces are doing their jobs well.

This came after the PNP were told to cleanse its ranks after several policemen were found to have been involved in some high-profile crimes.

Last Monday, nine Quezon City policemen were tagged by the victims in the Epifanio delos Santos Avenue (Edsa) robbery and kidnapping incident cracked by a photo uploaded by a concerned motorist on Twitter that went viral.

The victims said the band led by Chief Inspector Joseph de Vera and Senior Inspector Oliver Villanueva assaulted the white Toyota Fortuner they were riding and locked them up at the La Loma Police Station where the policemen were all assigned to.

De Vera and Villanueva, the highest ranking among the police suspects, are both from the Class of 2001 of the Philippine National Police Academy (PNPA).

“There are about 150,000 police. I am not defending De Vera but rogue members of the PNP are only the few percentage of the entire force,” Roxas said in a press briefing at Camp Crame.

Roxas also recalled the case of the January 2013 alleged rubout in Atimonan town, Quezon province where 25 policemen and soldiers, including the ground commander of the Atimonan operation, Superintendent Hansel Marantan, were slapped with criminal charges for the killings.

“Whether Marantan or De Vera, their fellow policemen themselves ran after them,” he said.

Read Next
Appeals court allows BIR to pursue P1.23-B tax case vs. Piatco
EDITORS' PICK
Look: Money Heist reveals ‘Plan Pilipinas’ as crew takes over several Philippine locations
Holidays made best with Acer’s ‘Holidays at Home’ raffle promo
EDITORIAL: Tap private sector help
PH firms transitioning to hybrid work setups in 2022
In-person classes resume for over 2,000 Metro Manila kids
A grand way to celebrate the holidays
MOST READ
Duterte sons face challengers for the first time
Robredo in Baguio: Trust is not entitlement, we have to earn it
Now an actor-model, ‘Carrot Man of PH’ prefers simple life in the province
The unraveling of Isko Moreno
Don't miss out on the latest news and information.