Cause of blast at German chemical plant unclear 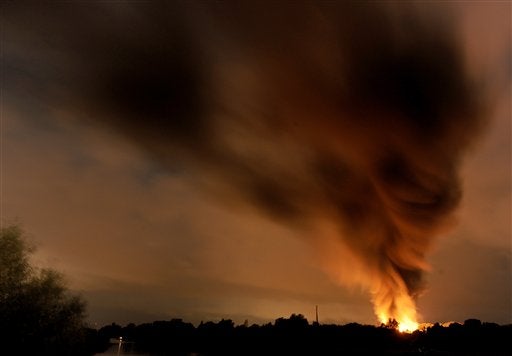 Smoke and flames rise over a chemical waste facility in Ritterhude near Bremen, Tuesday evening, Sept. 9, 2014. Police said that one person was severely burned in the blast Tuesday night and that the explosion damaged a nearby residential area. AP

BERLIN — Police in northwestern Germany say they have yet to determine what caused a massive explosion that seriously injured one person at a chemical processing company.

Police spokesman Marcus Neumann said Wednesday that investigators had arrived at the site in Ritterhude, near Bremen, but were unable to enter because firefighters were still working to douse the embers.

Neumann said a person who was reported missing turned out to be a 60-year-old company employee who suffered lift-threatening burns when he rushed to the scene of the blast.

The explosion at the Organo Fluid company happened Tuesday at 9 p.m. local time (1900 GMT) and could be heard for miles. About 300 firefighters worked all night to extinguish the intense fire.

Read Next
99 percent of police forces are doing their jobs well—Roxas
EDITORS' PICK
Vietnam’s ‘crazy guy’ aims to save ocean from waste
Acer starts the year off strong with the Aspire Vero National Geographic Edition
Gear up and get ready to play with Yamaha Mio Gear
COVID-19 infection of 22,958 more boosts PH’s tally to nearly 3.3 million
Over 3 Million worth of prizes to be won at Smart Padala’s SENDali Manalo Promo!
WHO says no evidence healthy children, adolescents need COVID-19 boosters
MOST READ
‘Sampal sa gobyerno:’ Drilon wants unvaxxed PAO chief barred from working
Vice mayor slams Vico Sotto for turning Pasig into a ‘puro palabas’ city
Guevarra to Acosta: Obey rules on unvaccinated
Guanzon denies Comelec delaying resolution of cases vs Marcos Jr. to favor any party
Don't miss out on the latest news and information.