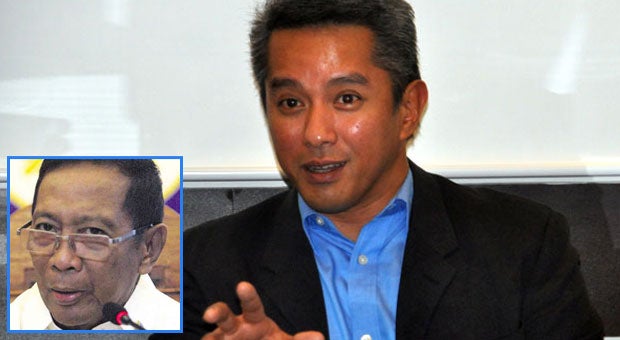 “A kangaroo court meant to malign the Vice President’s name.”

This is how the camp of Vice President Jejomar Binay has dismissed the Senate investigation into the allegedly overpriced P2.28-billion Makati parking building.

“There should be no doubt by now that the Senate investigation is really a kangaroo court, initiated by (Senators Antonio) Trillanes IV and (Alan Peter) Cayetano not in aid of legislation but to persecute Vice President Binay, who is considered the frontrunner in the 2016 elections,” said Cavite Gov. Jonvic Remulla, Binay’s spokesperson for political concerns, in a statement on Friday.

“The words of a former city official who admitted to rigging bids were taken as gospel truth by Trillanes and Cayetano and milked for whatever ounce of opportunity to malign the name of the Vice President,” he said.

At last Thursday’s hearing, Mario Hechanova, the former vice chair of the Makati government’s bids and awards committee, testified that bidding for the city’s infrastructure projects were regularly rigged on the orders of Binay, then mayor. Hechanova said he and other members of the committee were given a monthly allowance of P200,000 to ensure that the biddings would be fixed.

“Hechanova was given the widest leeway to malign the name of the Vice President without any evidence,” Remulla said.

Remulla said the Senate should instead take action against Trillanes who he claimed had issued a threat to the president of Hilmarc’s Construction Corp., the company that won the bid to build the controversial building, against testifying for Binay.

At last Thursday’s hearing Rogelio Peig, Hilmarc’s assistant vice president, testified that when he and Hilmarc’s president Roberto Henson were at the gallery of the session hall in the previous week’s hearing, a senator had spoken to them.

Trillanes then spoke up and said he was the senator being referred to. He denied having threatened the Hilmarc’s president but admitted to having told the latter that if Hillmarc’s was participating in a coverup, thinking that Binay would become President, they were making a big gamble because all the penalties of the law will be poured into this case.

Remulla said it was an open admission that Trillanes had indeed privately spoken to the Hilmarc’s president.

“Witnesses are supposed to be free from interference or improper influence through warnings, veiled threats, intimidation or promises of inducement, especially from senators conducting the investigation,” he said.

“Everything that Senator Trillanes said to the witness could have easily been said in open hearing. Yet, he chose to say it to the witness in seclusion, so he intended his message to be a veiled threat. It does not even matter whether the witness felt threatened or not,” he said.

“Witness tampering with proceedings, including congressional and administrative inquiries, is a serious breach,” he said.

Meanwhile, Sen. Aquilino Pimentel III, the chair of the Senate blue ribbon subcommittee handling the investigation, on Friday said that if the bidding for the building had indeed been rigged, Hilmarc’s “competitors” in the bidding would need to come clean if they had been awarded subcontracts.

Hechanova had testified that the bids and awards committee had sought competitor bids against Hilmarc’s, the favored bidder, with the committee itself preparing their bid documents to ensure their bids would be higher.

He said Hilmarc’s itself had recommended the competitor bidders, and that these companies knew that they were part of the farce. The other bidders would be disqualified on technical grounds during the postqualification evaluation, he said.

“Why would real and existing corporations, with reputation to protect, willingly play along in a rigged bidding? What’s in it for them? Were they paid to participate?” Pimentel said in a phone interview.

If necessary, the executives of “losing” bidders J. Bros. Construction and ITP Construction would be invited to the Senate hearing, he said.

Read Next
New SC member happy to serve
EDITORS' PICK
vivo brings to the Philippines a powerful smartphone with a slimmer body, the vivo Y02s for only PHP 6,499
Palace: Biggest supermarkets in PH commit to sell sugar at P70 per kilo
What to watch out for when selecting a video surveillance solution
Heads may roll at BOC, says Palace if sugar smugglers are allowed to use recycled import permits
House energy committee chair Arroyo bats for cheap electricity
DOH reports increase in daily COVID-19 deaths, mostly unvaxxed
MOST READ
Metro Manila’s No. 1 wanted man arrested, says NCRPO
DepEd to give teachers P5K cash allowance within first week of classes
Jordan Clarkson arrives in Manila to bolster Gilas Pilipinas
Brian Poe-Llamanzares receives his PhD in Public Administration
Don't miss out on the latest news and information.