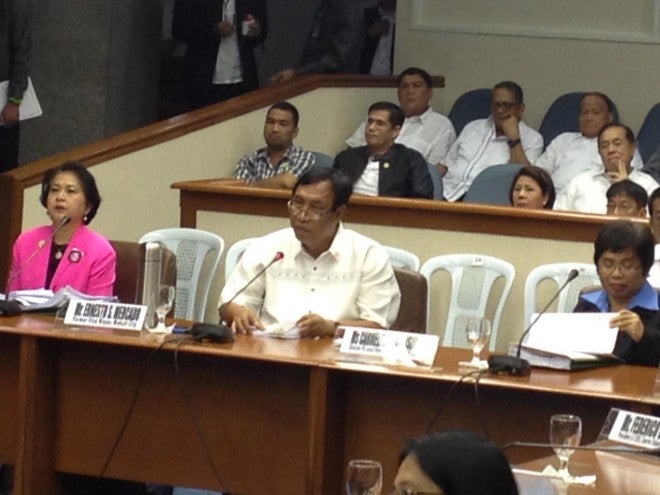 Former Vice mayor of Makati Ernesto Mercado making a statement in the senate against VP Jejomar Binay on the alleged corruption in the construction of the Makati city hall parking building. CATHY MIRANDA/INQUIRER.net

Former Makati Vice Mayor Ernesto Mercado made this allegation after he admitted before the Senate blue ribbon committee that he himself benefited from the Makati City Hall parking building, which was completed in 2013.

Mercado’s admission came after Senator Antonio Trillanes IV asked him directly if he benefited from the said project.

(That was a difficult question by Mr. Trillanes. It seems like you caught me. But you know, I am not a liar. I will only tell the truth because you and the people will only laugh at me (if I don’t tell the truth).)

(I will admit to you that I benefited from phases 1 and 2. We politicians all know that when I, as vice mayor, benefited, surely, the mayor benefited more.)

(I do not sign contracts. You asked me straight up and that is my answer. If I benefited (from it), then it is impossible that the mayor did not benefit (from it).)

When Trillanes asked for a categorical question whether or not the Vice President benefited from the project, Mercado answered: ‘Opo (Yes).’

Senator Aqulino “Koko” Pimentel III, who was presiding over the hearing, then asked if Mercado’s statement was based on his personal knowledge or just an “implication” that because he benefited from it, his mayor must have also gained from it.

But Trillanes interrupted and said: “Mr. Chairman, I think na-establish naman ho ni Vice Mayor Mercado na matagal silang magkasama (Mr. Chairman, I think Vice Mayor Mercado has already established that he and (Binay) have been together for quite some time)…”
At the start of his testimony, Mercado was shocked to learn that the cost of the 11-story parking building was P2.7 billion when it was only estimated at P1.2 billion.

Mercado was still the vice mayor during phases 1 and 2 of the project.