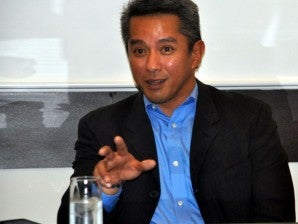 MANILA, Philippines–A triumvirate of corruption oversaw the rigging of the bidding for projects of the local government of Makati City when Vice President Jejomar Binay was its mayor, his new spokesman, Cavite Gov. Juanito Vicente “Jonvic” Remulla, said on Thursday.

Remulla made the statement after Hechanova linked the Vice President to the alleged rigging at the hearing Thursday of the Senate blue ribbon subcommittee on the allegedly overpriced Makati City Hall Building II.

Binay on Thursday night brushed aside allegations that he gave Hechanova and other members of the city awards and bidding committee a monthly allowance of P200,000 to rig the bidding of city projects.

“I received news that it was all speculation. I hope you (in the media) look at what happened. He was pointing to someone who is dead,” Binay told reporters in Taguig City where he visited the wake of a Filipino worker who was beheaded by militants in Libya.

Binay was referring to the late Morales, who Hechanova said was the one who had told him to rig the bidding of the Makati City parking building in favor of Hilmarc’s Construction Corp.

Further reacting to the allegations against him that Hechanova made at the Senate inquiry, Binay said it would not be long before he would be accused of killing Andres Bonifacio.

Binay reiterated that the allegations against him were politically motivated and that this was because he continues to top political surveys on potential presidential candidates in 2016.

“It is known in Makati that the ex-vice mayor, city engineer and Mario Hechanova were rigging the bidding, especially infrastructure,” Remulla said in a statement he issued shortly after the Senate hearing ended.

Asked by phone to explain where he got the information against Hechanova, Morales and Mercado, Remulla said Binay’s aides had told him that this “conspiracy” led by the former vice mayor was uncovered when Binay was about to end his term as mayor.

Remulla said Binay’s camp then had wondered how Mercado could “sustain his massive gambling” habit when the latter was found to have lost from P3 million to P5 million in a gambling game.

From there, Binay’s camp was able to uncover the alleged rigging of contracts by Hechanova’s group, Remulla said.

The Cavite governor said Mercado was the de facto mayor in the last three years of Binay’s watch.

Remulla said that this discovery prompted Binay to renege on his promise to support Mercado’s bid to become mayor of Makati. Binay’s son Junjun won the mayoral race in 2010.

Asked why the Vice President did not file charges against his then vice mayor, Remulla said that at the time Binay was “besieged” by the Arroyo administration, which had ordered his suspension from office.

Binay also thought there was “no refuge” if he went to the Office of the Ombudsman, according to Remulla.