MRT train continues run with one of its doors open 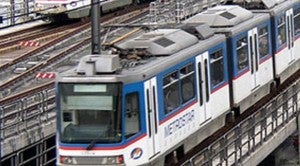 Jan Patrick Ventura, posted on his Facebook account a video showing that a door of a coach of the MRT 3 train was open while the train was plying northbound to Boni station.

The video showed that the MRT 3 coach was full of passengers.

He said that the incident happened at around 8:40 p.m.

Ventura said that the train stopped for about 20 to 30 minutes between Guadalupe and Boni stations when the train operator announced that a door was not fully closed in the Guadalupe station.

The train operator tried to manually close the train door but failed.

He also added that after failing to fix the problem, the train operator started the engine and “drove it like nothing happened”.

The train operator then announced that the passengers will be evacuated once the train reaches Boni station.

Ventura said that he was “traumatized even a little bit because what the train operator did [risk] the safety and security of the passengers.”

He also called for the MRT 3 management to find a permanent solution to the problems faced by the railway system and the incident will not happen again.

The video has gone viral with netizens voicing their dismay over the decision of the driver and the worry for the passengers.

In a tweet, MRT 3 spokesperson Hernando Cabrera said that the train should have suspended its trip and that the case will be investigated.

Another defective MRT train slows down further trips between stations