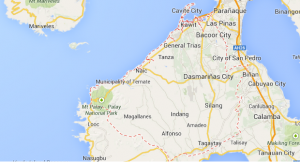 CAMP VICENTE LIM, Laguna – An employee of the Metropolitan Manila Development Authority is in critical condition Wednesday morning after he was shot by two unidentified gunmen in Dasmariñas City, Cavite, police said.

Russell Jun Sindac, 43, an MMDA operations officer assigned to the Coastal Road, had just boarded his van to go to work when his vehicle was fired upon by two men outside the victim’s apartment in Barangay (village) Salitran I around 5:40 a.m., Senior Superintendent Joselito Esquivel, Cavite police director, told the Philippine Daily Inquirer via text message.

He said Sindac suffered multiple gunshot wounds and was undergoing treatment at the Emilio Aguinaldo College Medical Center in Dasmarinas.

The assailants escaped on a motorcycle after the shooting, said case investigator Police Officer 3 Reynald Afable in a telephone interview.

Afable said the investigation was continuing and police were trying to determine the gunmen’s motive.