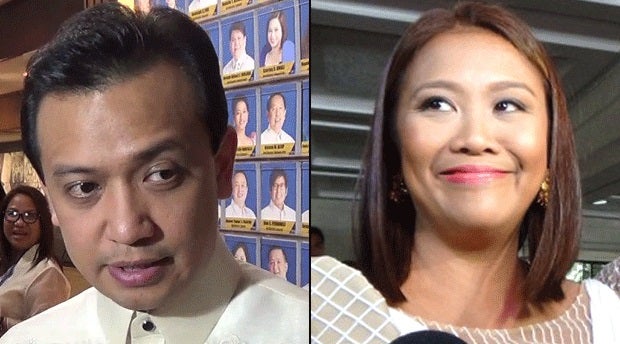 MANILA, Philippines — Nothing personal, so said Senator Antonio Trillanes IV, who admitted feeling the “awkwardness” now between him and Senator Nancy Binay.

It was Trillanes, who initiated a Senate investigation into the alleged overpriced Makati City Hall II involving members of Binay’s family.

Prior to the first hearing conducted by the Senate blue ribbon committee last Wednesday, Trillanes said he and Senator Binay were “very nice to each other.”

“I find Sen. Nancy as one of the nicest senators around,” he said in a television interview Thursday, a transcript of which was released to the media this Friday.

Though they still greet each other, Trillanes said, “You can feel the awkwardness in the air.”

“But I feel, we’ll get over this. This is not personal to me,” he said.

Read Next
Signature campaign vs pork barrel in Cebu starts Saturday
EDITORS' PICK
EDITORIAL: To a bike-friendly future
The Best Tech Gifts For The 2022 Holidays
Is it safe to talk politics again at family gatherings? ‘The Reconciliation Dinner’ shows us what that’s like
House energy committee chair Arroyo bats for cheap electricity
vivo’s coming to town to grant wishes with more holiday promos
Pagasa: Warm, sunny Sunday in most parts of PH
MOST READ
LOOK: Vhong Navarro transferred to BJMP detention facility in Taguig
The Elephant Man in the Senate
Posh village as ‘shabu’ haven
LOOK: Zanjoe Marudo bonds with Ria Atayde, her family
Don't miss out on the latest news and information.