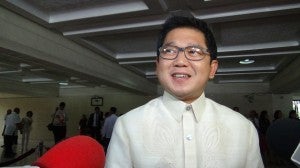 MANILA, Philippines – After slapping a suspected Chinese drug dealer, Quezon City Mayor Herbert Bautista is now pushing for the restoration of death penalty for drug-related crimes and rape in the country.

Bautista said the renewed implementation of the death penalty on drug-related cases and rape would send a strong message against perpetrators of these heinous crimes.

“I wish that death penalty will be revived for drug-related crimes and rape so that people will fear the law and give it some teeth,” he said in an interview over Radyo Inquirer 990 AM on Monday.

Bautista made the call after the arrest of suspected Chinese drug dealer Zhen Zhi Xu last week who was seized with 10 kilograms of shabu worth P15 million.

The arrest became controversial when the mayor slapped Xu twice after he saw that the suspect was smiling and making faces when he was about to be interviewed by reporters.

Bautista said he slapped Xu to show that he means business and that the latter should respect the law.

The imposition of death penalty in the country was repealed during the time of then President and now Pampanga Representative Gloria Macapagal Arroyo.

But Senator Vicente “Tito” Sotto III has filed a bill, reviving the death penalty, which remains pending in the Senate.

DOJ against restoration of death penalty