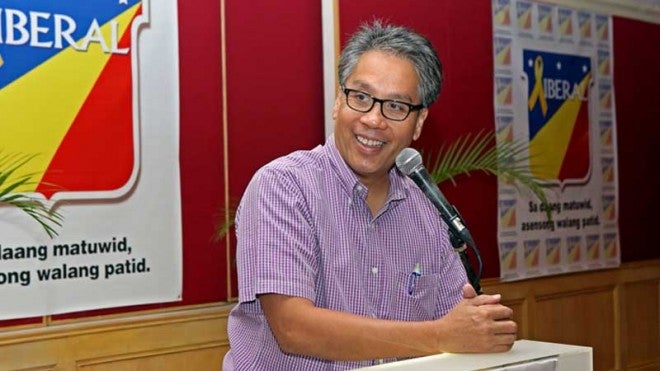 Interior Secretary Mar Roxas talks before new members of the Liberal Party in Cebu City on July 14, 2014. The Liberal Party will readily endorse Roxas should he decide to seek the presidency in 2016, according to Senate President Franklin Drilon. CDN PHOTO/LITO TECSON

MANILA, Philippines–The Liberal Party’s (LP’s) endorsement remains Mar Roxas’ for the asking, that is if the interior secretary should decide to seek the presidency in 2016, according to Senate President Franklin Drilon.

Drilon, the LP vice chair, said there was no truth to the claim that the ruling party was looking to adopt Vice President Jejomar Binay as its presidential standard bearer.

Binay told reporters the other day that he had heard talk that the LP could decide to adopt him as its presidential candidate in the 2016 elections, and indicated his openness to the idea.

Drilon said the LP has yet to discuss who to endorse for its standard bearer and was still waiting for the President’s decision on the matter. It has not talked about the possibility of adopting Binay, he said.

If Roxas wants it…

But if Roxas, the LP’s president-on-leave, would want to pursue the presidency, the LP will support him, Drilon said.

Roxas gave up his campaign for the presidency in 2010 to give way to then Sen. Benigno Aquino III, whose ratings shot up after his mother, former President Corazon Aquino, died.

Drilon said the President would want somebody who will continue his reforms and who has shown that he had supported his programs.

Other LP leaders dismissed as “pure speculation” and the result of “impaired hearing” Binay’s claim that he was being eyed as a guest presidential candidate by the ruling party.

“It is unfortunate that unfounded rumors have been circulated to perhaps boost the political stock of a presidential aspirant and to sow intrigue among the ranks of the Liberal Party and the allies of the administration,” said Iloilo Rep. Jerry Treñas, one of the leaders of the Visayas bloc in the House of Representatives.

“We, in the Visayas region, have dismissed such baseless rumors. As far as we are concerned, [Interior] Secretary Mar Roxas remains our strongest bet to continue the legacy of good governance of President Noynoy Aquino,” Treñas said.

Caloocan Rep. Edgar Erice said Binay must be suffering from “impaired hearing” for claiming to have picked up the LP’s interest in getting him as a guest candidate.

“Binay has no place in the LP because it is highly doubtful he will continue the ‘daang matuwid’ of the President,” said Erice. He noted that the vice president has yet to fully explain allegations of irregularities in a P15-million earthworm project and a parking building worth P2 billion.

“As President Aquino said, we should be wary of our ‘kalaban na may maitim na balak’ (an enemy with dark intentions),” he said.

According to Erice, Binay has been notably absent from the President’s major anticorruption reforms, from the impeachment of former Chief Justice Renato Corona to the prosecution of the pork plunder senators while being vocal in opposing the government’s budget reforms.

Batangas Rep. Sonny Collantes said he was surprised by Binay’s announcement as the subject was never discussed by the LP members and leaders. He said talk about 2016 was premature at this time and that the LP’s 2016 presidential candidate would be decided in a party convention.

Drilon attributed to “spin masters” the report that Binay could become the LP’s bet for the top post.

“All I can say is that the spin masters are having their day. There is no such thing. I am a member of the executive committee of the Liberal Party, and there has been no discussion on that,” he said in an interview with ANC’s Headstart.

Sen. Antonio Trillanes said Binay’s willingness to team up with the Liberal Party in 2016 was a sign of weakness and has exposed his vulnerability.

“If he [Binay] is really strong, why would he need to ally himself with the LP? Maybe he sees something happening to his candidacy which was why he is striking a deal with the LP,” Trillanes told reporters.

Binay, who declared his intention to run for president in 2016 quite early, has been topping the voter’s preference surveys on presidential candidates.

Binay-Roxas tandem for 2016? Why not, says Nancy Binay