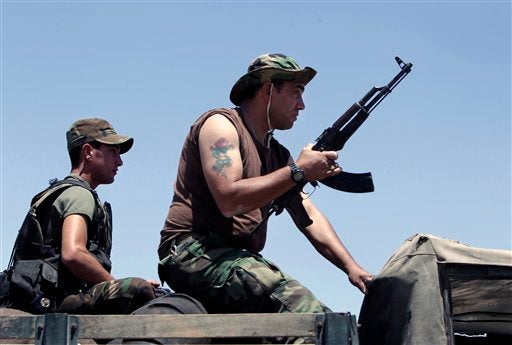 Lebanese army soldiers sit on top of a military truck as reinforcements arrive to the outskirts of Arsal, a predominantly Sunni Muslim town near the Syrian border in eastern Lebanon, Monday, Aug. 4, 2014. Thousands of Lebanese civilians and Syrian refugees packed cars and pickup trucks Monday, fleeing an eastern border town that was overrun by militants from neighboring Syria as Lebanese troops fight to liberate the area. AP

BEIRUT — The Lebanese army agreed to a 24-hour cease-fire in a border town held by Islamic extremists from Syria Tuesday to allow for negotiations for the release of captive soldiers and evacuate casualties, a senior Lebanese security official said.

The agreement appears to be the fruit of mediation by Muslim clerics to help end four days of fighting in the town of Arsal. Islamic extremists from Syria overran the town on Saturday, seizing Lebanese army positions and capturing a number of soldiers and policemen.

The fighting in Arsal marks the first time that the rebels battling Syrian President Bashar Assad have carried out a large-scale incursion into Lebanon, raising fears that the tiny country is being further drawn into its larger neighbor’s bloody civil war. The clashes have so far have killed 17 soldiers and wounded dozens. At least 22 soldiers and an unknown number of policemen have been declared missing.

In an apparent gesture of goodwill, militants released three policemen they had been holding captive on Tuesday. The Lebanese security official said the army later agreed to a “humanitarian” 24-hour truce to give way to negotiations for more such actions and to ease the suffering inside the town.

“We will return fire if our positions are fired upon,” the official said. He spoke on condition of anonymity in line with military regulations.

Sheik Salem al-Rafei of the Association of Muslim Scholars suffered wounds in the leg during the attack late Monday. He said the delegation was driving to Arsal when their car came under a hail of bullets.

“The driver managed to hide while my colleague and I were stuck in the car and I got hit in my ankle,” he told The Associated Press at a hospital in eastern Lebanon’s town of Zahleh.

Other delegation members were also hit, including Sheik Jalal Kalash who was badly wounded and was also in the hospital, said Sheik Raed Hleihel of the scholars’ association.

In a possible sign of the conflict spreading further into Lebanon, gunmen opened fire at a bus carrying soldiers in the northern city of Tripoli wounding seven early Tuesday, the army said. Gunmen also fired on several army positions in the city overnight, and an eight-year-old girl was killed when a bullet struck her in the head.

Like Arsal, Tripoli is predominantly Sunni and many residents back the overwhelmingly Sunni rebels in Syria trying to overthrow Assad.

Lebanon’s powerful Hezbollah militia, however, not only backs the government of Assad, but has also fought in Syria side by side with his forces.

The Syrian government has seized nearly all the strategic Qalamoun region bordering Arsal with the help of Hezbollah fighters.

Anti-Hezbollah Lebanese politicians have accused the group of being responsible for the spillover in Arsal. Members of the Future Movement, Lebanon’s main Sunni party demanded that Hezbollah withdraw from Syria, accusing it of dragging terrorists to Lebanon because of its involvement in the civil war next door.

However there has so far been no evidence of the group fighting in Arsal, and Hezbollah issued a statement Tuesday denying it was involved. “Confronting the armed terrorists and protecting civilians is the responsibility of the Lebanese army exclusively,” it said.

Meanwhile, France said it was in close contact with the Lebanese government to respond quickly to a request to speed up delivery of weapons.

Saudi Arabia pledged $3 billion in December to help strengthen the country’s armed forces and purchase weapons from France in the biggest grant ever for the nation’s weak military. Delivery, however, has been delayed.

Syria’s conflict began in March 2011 as a popular uprising against Assad’s rule, but turned into an insurgency after government forces violently cracked down on demonstrators. It has since become civil war with sectarian overtones. Over 170,000 people have been killed in Syria in more than three years of fighting, activists say.