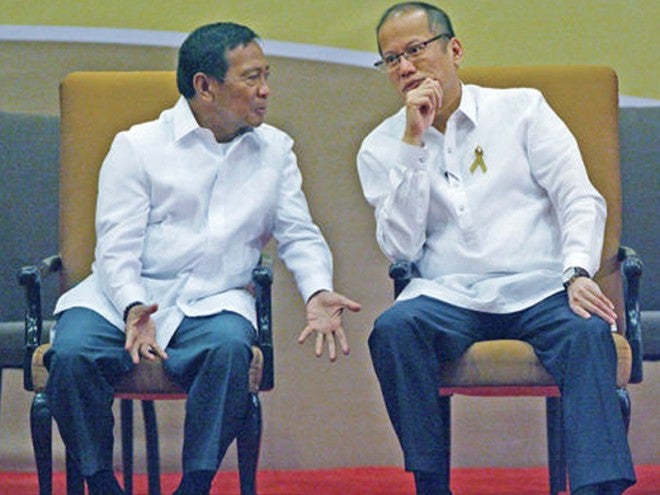 It turns out President Benigno Aquino III is not alone in suffering a serious decline in public approval.

The results of a recent Pulse Asia survey showed not just the President but all of the country’s top 5 officials posting declines in their approval and trust ratings between March and June 2014.

Pulse Asia earlier released the results of its June 2014 Ulat ng Bayan survey showing Mr. Aquino’s approval rating dropping by 14 percentage points, from 70 percent to 56 percent, and his trust rating also down by 16 points, from to 69 percent to 53 percent.

Even the topnotcher, Vice President Jejomar Binay was down scoring 81 percent, down 6 points from 87 percent in March, while 16 percent were undecided about, and 4 percent disapproved of, his performance.

Senate President Franklin Drilon posted 52 percent approval, down six points from 58 percent in March, while indecision about his performance increased 15 points, from 23 percent to 38 percent. Disapproval with Drilon’s performance declined by 8 points from 18 percent to 10 percent.

Of these five top officials, Mr. Aquino, Binay and Drilon were the only ones to have scored majority approval ratings, Pulse Asia said. “Appreciation was the majority sentiment for these three officials,” it said.

On the other hand, a plurality of those surveyed showed ambivalence toward the performance of Belmonte and Sereno, Pulse Asia said.

Sereno drops in all classes

Sereno’s approval ratings dropped across all areas and classes, with double-digit declines in the Visayas (23 percent from 34 percent) and Classes ABC (26 percent from 49 percent).

Belmonte and Sereno also posted lower trust ratings from 31 percent to 28 percent and from 36 percent to 32 percent, respectively.

The Chief Justice’s trust rating plunged across most areas and classes, with marked declines in the Visayas (16 percent from 32 percent) and Classes ABC (25 percent from 44 percent). It remained unchanged in Metro Manila (31 percent).

The survey, conducted from June 24 to July 2, used face-to-face interviews with 1,200 adults aged 18 and older. It had a margin of error of plus-or-minus 3 percentage points.

Among the issues that preoccupied the country immediately before and during the conduct of the survey were: The filing of plunder charges against three opposition senators and other personalities implicated in the congressional pork barrel scam; the Supreme Court decision declaring the Disbursement Acceleration Program (DAP) unconstitutional; the continued tension between the Philippines and China; and the President’s decision to reject the nomination of actress Nora Aunor as National Artist for Film. Inquirer Research 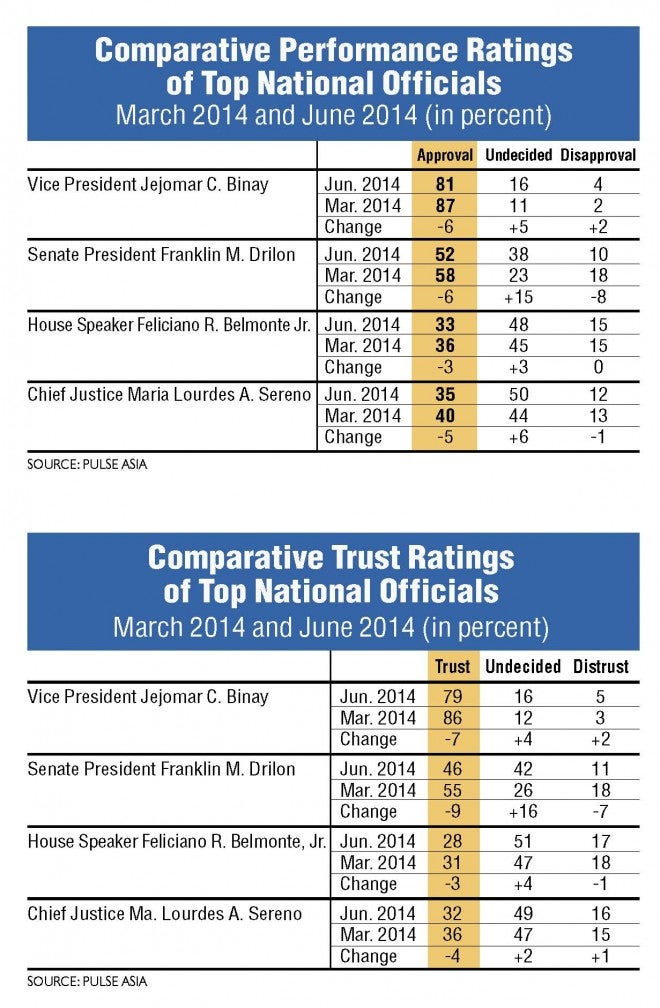