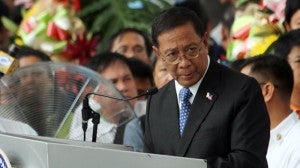 House Speaker Feliciano “Sonny” Belmonte’s net satisfaction rating was downgraded from a “moderate” +16 in December last year to a “neutral” -1 in March 2014 while Senate President Franklin Drilon’s rating remained moderate, dropping from +25 to +17.

Aside from his current stint, Belmonte also served as House Speaker in 2001. Drilon, on the other hand, assumed presidency of the Senate from 2001 to 2006.

Chief Justice Lourdes Sereno’s ratings also showed a downward trend from a “moderate” +16 in December 2013 to only a “neutral” +4 last March.

On the other hand, Vice President Jejomar Binay continues to experience widespread support with an “excellent” net satisfaction rating of +73, an improvement to his “very good” December 2013 rating of +62.

Binay, who is said to be the opposition’s standard bearer for the 2016 elections, has been receiving net satisfaction ratings that are either “very good” or “excellent” since assuming office in 2010.

On the other hand, Drilon who replaced the beleaguered Senator Juan Ponce Enrile as senate president in July 2013, has received a sliding net satisfaction ration at +37 in September, +25 in December and +17 last March.

A month before the survey was conducted, alleged pork barrel scam mastermind Janet Lim-Napoles met with Justice Secretary De Lima to give her affidavit on the pork barrel scam. De Lima refused to divulge the details of their meeting but affirmed that the businesswoman spilled the beans on Senators Juan Ponce Enrile, Jose “Jinggoy” Estrada and Ramon “Bong” Revilla Jr.