Man robbed, wounded on his way to bank | Inquirer News

Man robbed, wounded on his way to bank 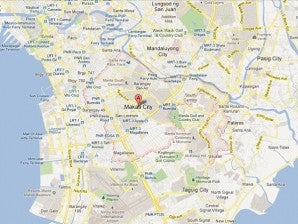 MANILA, Philippines – A man, who was just about to deposit money in a bank at the boundary of Makati and Pasay City, was hurt after a robber shot ‎him on Monday morning.

The still unnamed victim, reportedly 63 years old, was wounded after a man snatched away his bag in front of a bank along Gil Puyat Avenue.

A radio report quoted witnesses as saying that the man was walking towards the bank when the hold-upper drew his firearm, shot the victim and grabbed his bag.

The suspect was seen fleeing from the sc‎ene carrying the victim’s bag.

One witness said the suspect was wearing a jacket, denim pants and rubber shoes.  A cohort of the robber aboard a motorcycle ‎reportedly served as a lookout, the witness added.

Responding personnel have brought the holdup victim to ‎a hospital for medical treatment.