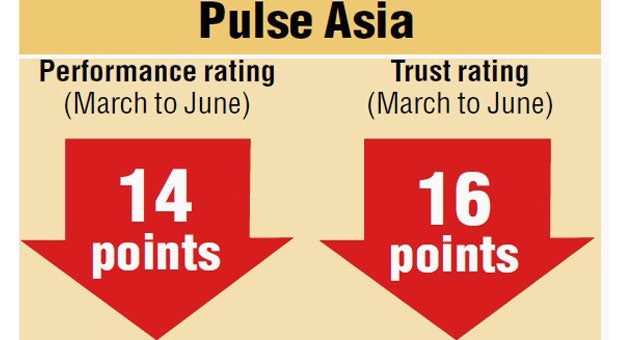 MANILA, Philippines–What goes up must come down—even for President Aquino.

Amid controversies hounding the Aquino administration, the approval and trust ratings of the President suffered double-digit drops between March and June, plunging to their lowest levels since he came to power in 2010, according to the latest Pulse Asia survey.

The survey, conducted from June 24 to July 2, had 1,200 respondents ages 18 and older, and a margin of error of plus-or-minus 3 percentage points.

“I don’t think we caught the full extent of the DAP on the popularity of the President,” Tabunda told the Inquirer.

She pointed to the Priority Development Assistance Fund, the filing of plunder and graft charges against Senators Juan Ponce Enrile, Jinggoy Estrada and Bong  Revilla and their subsequent arrests as among the main issues surrounding the huge declines in Aquino’s ratings.

“It is easier to do nothing. When you do something, you can polarize the people. Sympathizers [of the three senators] may have shifted to indecision,” Tabunda said.

She said some people were already wondering if the President could do something to address graft and corruption.

Other issues at the time of the survey include Aquino’s decision to reject the nomination of Nora Aunor as a national artist; statements of support issued by proadministration legislators amid calls for the

President’s impeachment and the resignation of Budget Secretary Florencio Abad following the Supreme Court’s DAP ruling; and the surge in prices of rice, garlic and sugar.

“While most Filipinos remain appreciative of President Aquino’s work (56 percent) and continue to express trust in him (53 percent), they grant him much lower national approval and trust ratings in June,” Pulse Asia said in a statement released on Monday.

Indecision about the President’s performance climbed 8 points, from 22 percent to 30 percent.

At the same time, the proportion of those who expressed big trust in Aquino dropped 16 points, from 69 percent in March to 53 percent in June.

The undecided about the President’s trustworthiness climbed 11 points from 22 percent to 33 percent, while those who distrusted the President rose 5 points, from 9 percent to 14 percent.

“It is easier to stay popular if you do not do any earthshaking moves,” Tabunda said.

On the other hand, disapproval of the President’s performance increased 11 points in the rest of Luzon (from 7 percent to 18 percent), and among Classes ABC (from 11 percent to 22 percent). 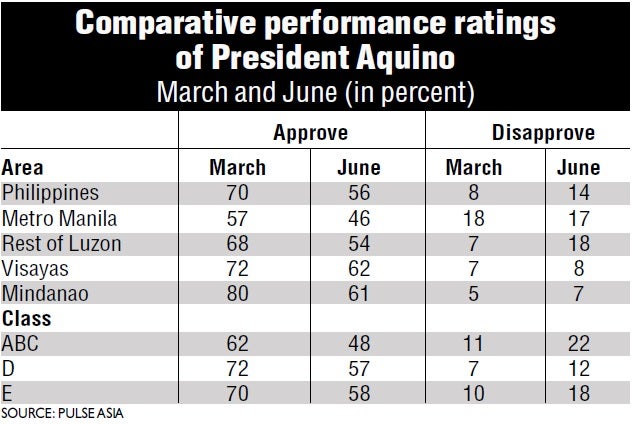 Between March and June, the proportion of those who expressed “big trust” in the President also declined by double digits across all areas, except in the Visayas, where it declined by 8 points (from 69 percent to 61 percent).

Aquino is ineligible for reelection but the prospects for his Liberal Party’s candidate are likely to be damaged if his popularity is undermined in the run-up to the 2016 presidential election.