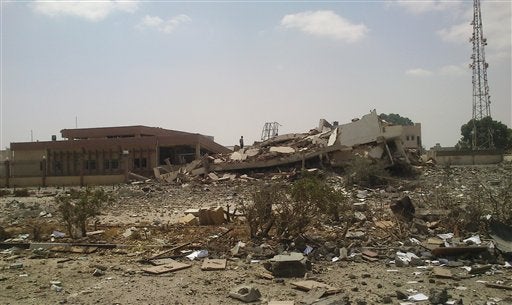 A man stands on the rubble of the main building of the security headquarters that was collapsed after an attack by Islamic hard-line militias in Benghazi, Libya, Friday, Aug. 1, 2014. Islamic hard-line militias, including the group accused by the United States in a 2012 attack that killed the ambassador and three other Americans, claimed control of Libya’s second largest city, Benghazi, after overrunning army barracks and seizing heavy weapons. AP

RAS AJDIR, Tunisia — Tunisia closed its main border crossing with Libya on Friday after thousands of stranded Egyptian and foreign nationals, fleeing militias’ fighting and violence in Libya, tried to break through the passage, the Tunisian news agency said.

It was the second eruption of unrest at the border in as many days, as thousands of Libyans stream into neighboring Tunisia, along with foreign nationals. Tunisia is the only escape route as fighting escalates in the Libyan capital, Tripoli, where rival militias have been battling for weeks for control over the airport.

Friday’s unrest took place when thousands of Egyptians, barred from entering Tunisia because they had no visa, held a protest then broke through part of a fence at the Ras Ajdir crossing, Tunisian security officials said. The police responded by shooting in the air and firing tear gas. The officials spoke on condition of anonymity because they were not authorized to speak to the press.

An Associated Press reporter at the crossing said no one managed to make it to the other side and security forces used vehicles to physically block access. After a Tunisian police officer was wounded by gunfire from the Libyan side of the border, authorities closed the crossing, the official Tunisian news agency TAP said.

A day earlier, two Egyptians were killed during a similar protest demanding to be let through. Tunisian officials say thousands of Libyans have been crossing the border each day the past week.

Libya is witnessing its worst factional violence since the downfall of the longtime dictator Moammar Gadhafi in 2011 civil war. Along with the fighting in Tripoli, which the Health Ministry said has killed 214 people and wounding more than 980 others, Islamic militias the past week overran army bases in Libya’s second largest city, Benghazi, and claimed control of the city.

In a sign of a backlash, thousands of Benghazi residents marched Friday evening in a protest against militias. They waved Libyan tricolor flags while clapping and chanting against militias.

“I am out today to protest against the terrorists and for the sake of this city and its sons,” said Mohammed Makhlouf, a Benghazi-based movie director.

On his Facebook page, Abdel-Moneim al-Yassir, a lawmaker in the outgoing parliament and head of its National Security Committee, called for a “popular uprising to rescue Libya” and work out the disarming and demobilizing of militias.

Earlier Friday, a powerful explosion ripped through the main police headquarters in Benghazi, nearly flattening it, witnesses said. The blast shook nearby houses and echoed across the eastern city.

The headquarters was empty because of earlier shelling by militiamen. Friday’s blast appeared to be from explosives planted inside the building, said witnesses at the site. They spoke on condition of anonymity, fearing for their own safety. Police officials in Benghazi, could not be reached for comment.

The Tripoli violence erupted in early July when militias originally from the western city of Misrata, which are allied to Islamist politicians, carried out a surprise attack on militias from the western town of Zintan who control the airport. The move was in retaliation for a months-long campaign aiming to crush Islamic militias being waged by army troops led by a renegade general, Khalifa Hifter.

The battles have destroyed parts of Tripoli’s international airport, and shelling earlier this week hit three oil depots, sparking a raging fire that firefighters have struggled to put out amid the continued fighting. The National Safety Agency, which oversees emergency services, said that one depot was still on fire on Friday.

Militias have held sway in Libya since emerging from the 2011 civil war that led to the ouster and death Gadhafi. The central government, police and military have largely had no authority.

The violence has also forced the newly elected parliament to change its venue for its first session, due to take place on Saturday. It was scheduled to convene permanently in Benghazi but now with militias’ having upper hand there, the lawmakers changed its venue to the eastern city of Tobrouk.