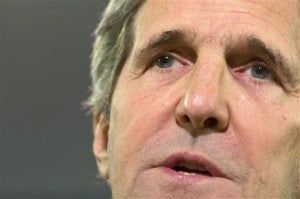 WASHINGTON — Secretary of State John Kerry is condemning an “outrageous” violation by Palestinian militants of the Gaza cease-fire he helped to broker. Kerry is demanding the immediate release of an Israeli soldier apparently abducted by the radical Hamas movement.

Kerry released a statement Friday. He says the militant attack was an affront to the assurances that both sides had given to the United Nations about respecting the cease-fire. Kerry is demanding that Hamas move to “immediately and unconditionally release” the missing Israeli soldier. The attack also killed two Israeli soldiers.

Kerry says he has spoken with Israeli Prime Minister Benjamin Netanyahu about the developments, which led Israel to declare the cease-fire over. Kerry says it would be a “tragedy” if the attack led to more violence and suffering.