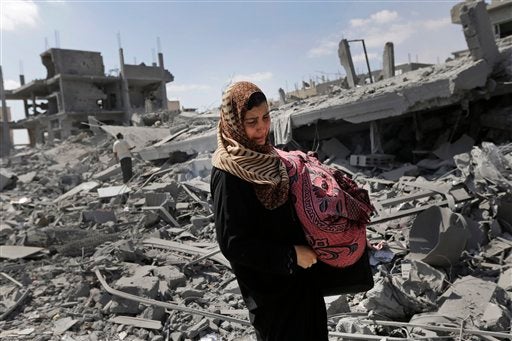 BEIT HANOUN, Gaza Strip — Israel on Saturday extend a 12-hour humanitarian truce in the Gaza war by four hours, the longest lull in 19 days of Israel-Hamas fighting, as a Gaza health official said the overall number of Palestinians killed surpassed 1,000.

Thousands of Gaza residents who fled the violence streamed back to devastated border areas during Saturday’s truce to find large-scale destruction: fighting pulverized scores of homes, wreckage blocked roads and power cables dangled in the streets.

In the northern town of Beit Hanoun, Siham Kafarneh, 37, sat on the steps of a small grocery, weeping. The mother of eight said the home she had spent 10 years saving up for and moved into two months earlier had been destroyed.

“Nothing is left. Everything I have is gone,” she said.

Across Gaza, more than 130 bodies were pulled from the rubble Saturday, officials said. In southern Gaza, 20 members of an extended family were killed before the start of the lull when a tank shell hit a building where they had sought refuge, Palestinian health official Ashraf al-Kidra said.

Israel launched a major air campaign in Gaza on July 8 and later sent ground troops into the Hamas-ruled territory in an operation it said was aimed at halting Palestinian rocket fire and destroying cross-border tunnels used for attacks.

More than 1,000 people, mainly civilians, have been killed and more than 6,000 have been wounded over the past 19 days, al-Kidra said. Israeli strikes have destroyed hundreds of homes, including close to 500 in targeted hits, and forced tens of thousands of people to flee, according to Palestinian rights groups.

More than 160,000 displaced Palestinians have sought shelter at dozens of United Nations schools, an eight-fold increase since the start of Israel’s ground operation more than a week ago, the U.N. said.

Israel says it is doing its utmost to prevent civilian casualties, including sending evacuation warnings to residents in targeted areas, and blames Hamas for putting civilians in harm’s way. Israel has lost 40 soldiers and two civilians, and a Thai worker also has been killed.

“There is no proof that any kind of gratuitous damage is being inflicted,” said Israeli legislator Ofer Shelah of the centrist Yesh Atid party. Israeli troops are “fighting with an enemy dug in within the civilian population, dug in underground or within the houses there,” he said, adding that “those are the consequences of such a fight.”

Later Saturday, the U.N. asked Israel to extend the humanitarian truce by 24 hours, according to a text message by an Israeli government official who requested anonymity because he wasn’t authorized to discuss it.

The Israeli Cabinet voted by phone to agree to a four-hour extension and to consider the U.N. request at a Cabinet meeting later Saturday, the message said. The cease-fire now is scheduled last until midnight (2100 GMT) with the extension.

On Friday, Israel rejected a proposal by Kerry and U.N. chief Ban Ki-moon to halt fire for a week and to begin talks during this period on easing the border blockade of Hamas-ruled Gaza.

Hamas has said it would not halt fire until it won guarantees that the border blockade, enforced by Israel and Egypt, would be lifted.

Under a gradual extension of a humanitarian truce, Israel would not be required to discuss new border arrangements in Gaza. It would also have a freer hand in continuing to demolish Hamas military tunnels under the Gaza-Israel border, as it has done in recent days.

The Israeli military said that through Saturday’s lull, troops uncovered four more tunnel shafts and said they would continue such activities.

A Hamas spokesman, Mushir al-Masri, speaking before the Israeli decision, said that the group would consider an extension of the truce as long as “it does not mean that we retreat from our known demands.”

Gazans dig dead from rubble in scenes of war devastation