The poor fight, not wait for inclusion 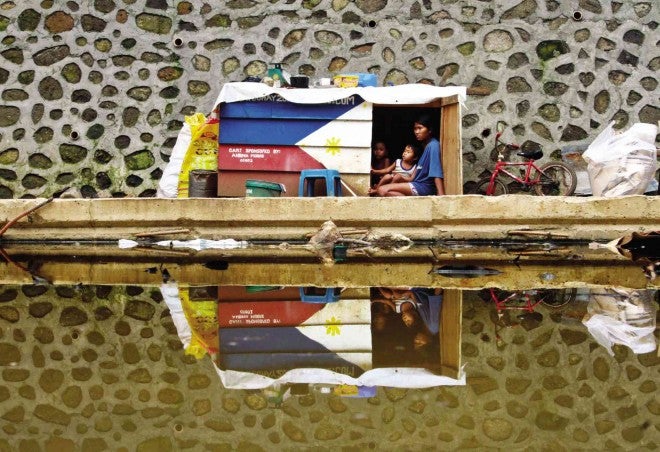 BE IT EVER SO HUMBLE This is a portrait of a country wallowing in poverty: A family finds refuge in a pushcart painted like the Philippine flag. Merlisa Villoga, 23, and her children Jerico, 5, and Luigi, 2, stay together in a tiny place they call home on Agham Road, Quezon City, while her husband Larry is away doing part-time work. EDWIN BACASMAS

The two women from the slums of North Harbor in Tondo, Manila, were among the urban poor community leaders who stood witness as Mr. Aquino signed a “covenant” at  Del Pan Sports Complex in March 2010, in one of the sorties of his presidential campaign.

The covenant, they said, had the would-be President vowing to work for their “in-city relocation” or “on-site development”—buzzwords of urban renewal that pertain to the transfer of informal settlers to better living conditions not far from or in the same area they currently occupy. 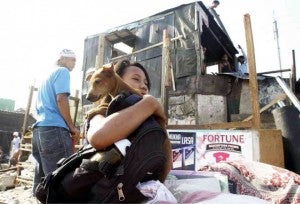 Yet four years later, one week before the President delivers his fifth State of the Nation Address (Sona), Sabalza received for the first time in her life a notice saying she should vacate her home to make way for the government’s modernization plan for North Harbor. Her family, along with neighbors who got the same notice from the Philippine Ports Authority (PPA), were given 30 days or until Aug. 22 to leave the area known as Slip Zero. They have two choices: Either avail themselves of a government housing site in Naic, Cavite province, or use a P27,700 aid to find or build new dwellings elsewhere.

Ladan, meanwhile, faces no threat of eviction—“for now,” she says. But in what may be considered a preemptive move, she wrote last week a one-page profile of her organization at Isla Puting Bato, a slum colony on a Manila Bay breakwater. Her piece would be attached to a position paper reiterating her group’s appeal to the government to provide them more decent homes.  She dares to visualize mid-rise tenements facing the sea and replacing her shantytown.

Ladan, secretary of People’s Solidarity of Isla Puting Bato, voted for Mr. Aquino. So did Sabalza, president of Samahang Magkakapitbahay sa Slip Zero; but the Aquino campaign sticker on her front door has been torn off, as if somebody who was really angry wanted it removed.

Their continuing struggle for a way out of poverty hardly makes them poster girls for the third Aquino catchphrase: “Inclusive growth.”

An argument (or excuse) can always be made about the poor taking years and even decades to feel the so-called trickle-down effects of rising macroeconomic figures. Sabalza and Ladan—both high school dropouts when they moved to the city to escape rural poverty—have lived through five presidencies, each promising seats closer to the banquet for those who had long subsisted on crumbs.

The odds remain hugely stacked against them. Ladan, a widow and mother of three, still lives in a cramped two-story structure 8 meters long and 1.5 m wide—long and thin like Isla Puting Bato itself. Sabalza, on the other hand, still shares the same roof with 11 family members, including eight of her 10 children. (Five other children had died; and yes, “we didn’t practice family planning,” she admits with a toothless smile.)

But now, over the last half of their lives they have been trying to break the mold of the brooding, whining squatter. They chose not to be another Mang Pandoy, the gaunt vegetable vendor who became the “face of poverty” of the 1990s during the Ramos administration, famous for his willingness “to be shot” by any trigger-happy man for P100,000 so he could feed his eight children. With his instant fame, Mang Pandoy received government dole, was made a “consultant” by then Speaker Jose de Venecia, and even got a hosting gig on a state TV program—but he remained poor till his death from tuberculosis in 2008, long after funds from the patronage had dried up. 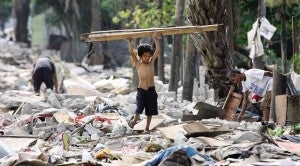 Sabalza and Ladan are instead waging their battles on poverty on two fronts: The first by entering the public sphere, organizing neighbors, and making people like Mr. Aquino sign covenants; the second by taking the more personal time-tested approach of sending their children to school.

Their motto: One has to fight for inclusion, not just wait for it.

“The poor must know how to assert their rights. There are many out there who always complain but are actually wasting their time playing bingo,” said 48-year-old Ladan, a migrant from Samar province who became a factory worker, a nanny and then a waitress when she moved to Manila in the 1980s.

Widowed since 2009 and now a church worker as well, she said “I have been molded by many leadership seminars” conducted by Urban Poor Associates (UPA), a 22-year-old group advocating housing rights for informal settlers.

Among her organization’s accomplishments for its 600 member families was a successful lobby to finally have running water in at least five “legal” outlets and have the supply rationed at only P3 per 24-liter container (from the original rate of P6). The money is collected by the association, which then pays the water company.

Sabalza, a 54-year-old native of Aklan province, had been a jai-alai bookie, a laundrywoman, a domestic helper and—during the toughest of times—a Pier 2 denizen who “picked the bananas or vegetables that fall off the containers as they’re moved to the trucks,” just to have something to eat or sell. Married to a port utility worker who earns P12,000 a month, she currently runs a sari-sari store and earns about P300 a day.

Through her organization at Slip Zero, her home for the last 33 years, the neighborhood has conducted feeding programs, tried urban gardening and raised “savings” now amounting to about P150,000, which she said could be used as seed money for bigger projects like socialized housing.

Before becoming affiliated with UPA like Ladan, Sabalza said, she joined street protests in the 1990s, mainly those organized by a feminist group. 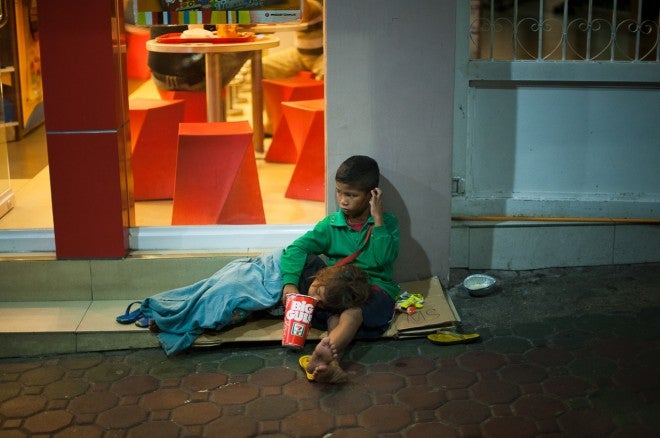 BIG BROTHER’S WARMTH. A young Badjao boy cuddles and protects his little sister from the freezing evening temperature of Baguio City in the middle of July, as he begs for alms along Session Road. Baguio social workers have been discouraging Badjao families from travelling up to the uplands to beg with their children. PHOTO BY RICHARD BALONGLONG / INQUIRER NORTHERN LUZON

“But we broke away (from that group) because it seemed that what we were doing had no clear direction. It was always about bringing the government or the President down. I didn’t quite understand what they really wanted to achieve,” she recalled.

And like Ladan, Sabalza now considers herself a veteran of leadership seminars. “I learned that in Brazil, for example, informal settlers are not supposed to be relocated more than 5 kilometers from their original site.”

Distance is indeed among her main worries about resettling in Cavite, now that the PPA wants her family and the others out. “The fare from Naic to Manila would cost about P98 during the day and P144 at night.”

She knows this because many Slip Zero residents have already moved there in batches since last year. “I heard that they still don’t have electricity and only about three families have solved the problem on their own by buying solar panels. The lone poso (manually operated water pump) is being shared by 139 families.”

For the next batch that now includes Sabalza’s household, a lawyer provided by UPA would again go to court to seek a temporary restraining order on the PPA notice, she said.

But the mother of 10 is not really running out of options. All of her children—ages 12 to 33—have either finished or are currently attending school. Two recently started working in Abu Dhabi—a mechanical engineer and an office systems technologist—and had since been sending her money.  Two more—one who studied computer science and another who took up hotel and restaurant management—are also bound for work abroad and are waiting for their visas.

“I really wanted all my children to have an education,” she said. “We may be that many (in the family) but it can really be a happy affair especially when we are gathered together and the siblings are helping each other.” 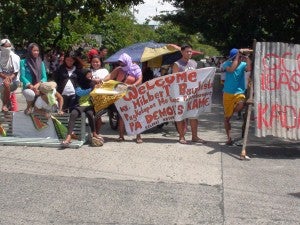 Their little home also has a computer and a printer provided by UPA for Ladan’s work as a community leader.

“I think my children have been serious about their studies because they see what I’m doing and how I’m being empowered,” she said.

Ladan said she had been offered a job in the barangay hall, which she declined since “what I do today enables me work (on issues) on the national level.”

Perhaps an example of going national would be that day in March 2010 when she and Sabalza saw the presidential candidate Aquino sign that supposed covenant with the urban poor. Four years later, Ladan still wishes the President would succeed and finish his term amid “this latest talk of impeachment,” while Sabalza believes he is just being brought down by the follies and failings of “those under him.”

Still, as the President faces the nation for another Sona, these Tondo women would rather see him deliver more than just buzzwords.

for family of five 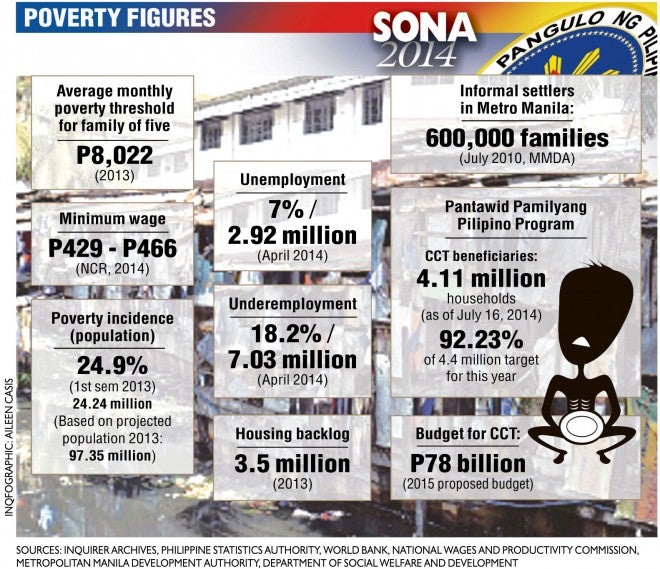 (Based on projected population 2013: