In Bayawan, bikes get bamboo makeover 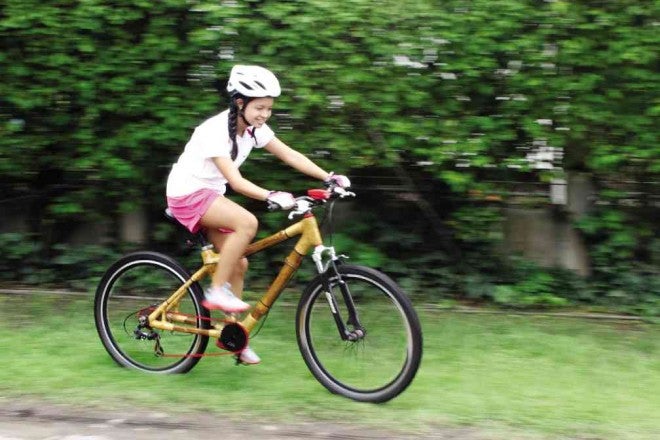 For over a week, a group of craftsmen worked feverishly, huddled in a corner of the Integrated Bus Terminal in Bayawan City, Negros Oriental.

After days of measuring, cutting, sanding, varnishing and fitting, Bayawanons caught a glimpse of their finished product: A bamboo-framed bicycle.

Is it strong? Is it safe?

These were among the common questions asked by curious onlookers after seeing the shiny bicycles with bamboo frames.

John Climaco, an educator from Los Angeles, California, could only smile in answer and refer them to a video showing on a nearby TV set about the many rugged trails this bamboo bike had been on.

A son of a furniture maker from Zamboanga, Climaco returned to the Philippines from Los Angeles to teach his fellow Filipinos how to make bamboo bicycles.

He was able to secure a small grant from Crossroads School, a high-end K-12 school in the Hollywood area where he chaired the physical education program, that allowed him to return to the Philippines and conduct training sessions on how to manufacture bamboo bicycles.

Making bamboo bicycles was a passion he acquired from the legendary Craig Calfee, the pioneer designer of bicycles made of lightweight carbon fiber metal.

In an interview with Bicycling.com, Calfee said he first made the bamboo bike frame as a publicity stunt in 1996. He added it to his line of bike frames in 2005, “so that casual riders and serious racers alike could appreciate the superior-ride quality of bamboo.” 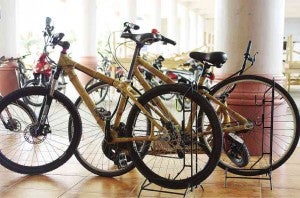 BAMBOO bikes like these can now be made in Bayawan City, Negros Oriental, after nine craftsmen went through a one-week training by US-based Filipino John Climaco. PHOTO COURTESY OF BAYAWAN BAMBOO BIKE INITIATIVE

The idea of making bicycle out of bamboo occurred to Calfee while he and his dog were playing with a piece of bamboo.

That experience, Calfee told a reporter for US-based Smithsonian

mag.com, made him realize how strong bamboo was. Calfee made the first bamboo bike in 1995, which he uses to this day.

Bamboo as a material for bicycles, Climaco explained, has one of the highest tensile strengths, which means it can absorb more stress without breaking.

“All the components are available here, plus craftsmanship is good here (in Bayawan),” he said.

Getting down to the technical details, Climaco said that because of the springy characteristic of the bamboo, it gives the rider a different feel.

“It wants to go back to its original shape, so it springs you forward,” Climaco said.

Best of all, the bamboo frames that they’ve built, so far, have fared very well even against expensive metal bicycles.

“The rich bikers even say it rides like a titanium frame,” Climaco said.

Local mountain bikers, like Kevin Zerna, may not know the ride of a titanium frame but said riding a bamboo bike would require a little getting used to.

Calfee came to the Philippines in 2009 to hold a one-week training session on building bamboo bikes in a farm in Tarlac.

That was the time Climaco and his alma mater University of the Philippines mountaineering buddies teamed up to form Kawayantech, which positioned itself as a manufacturer of bamboo bikes and other products for socialized housing communities in the Philippines.

Climaco got his college degree at UP Diliman after his family moved to Manila from Zamboanga City. While at UP, he was an active member of the UP Mountaineers.

The project with the UP Mountaineers failed to take off following the death of one of their members, Hecky Villanueva, who was Kawayantech’s link with socialized housing groups.

Climaco’s search for materials and Philippine partners led them to Buglas Bamboo Institute (BBI), a nonstock, nonprofit organization in the town of Dauin, Negros Oriental, that was known for making bamboo houses and furniture.

Jobert Koerkamp of BBI, introduced Climaco to Jude Cabangal, an artist and avid biker of Bayawan City. The connection was made.

Climaco fell in love with Bayawan the minute he set foot on it.

“There’s something in the air here in Bayawan. It’s different here,” he said, citing a local trait called Bayawanihan (bayanihan among Bayawanons).

Cabangal, who works at the Office of the City Administrator, gathered nine craftsmen to form the Bayawan Bamboo Builders’ Guild (BBBG) and to be trained on how to make bamboo bikes.

“Our city is trying to position itself as an environment-friendly city so the bamboo bike industry was in harmony with that goal,” he said.

They were grouped in threes and each group made one frame. “I’m confident that individually, they can build a bike on their own,” he said.

Priced at P25,000 per frame, BBBG seeks to build one bike frame per month and more in the future.

“We will start with road bikes—fixies, or fixed gear bikes,” Cabangal said. The bikes will initially be sold locally. They will aim for the international market once supply increases.

After a year of making fixies, Climaco said he is confident that BBBG will be able to gain enough expertise to build other bike models.

The mountain bikes, however, will be confined to front-suspension types, or “hard tails.”

Climaco said he would try to stay away from full-suspension bikes because these have too many moving parts.

Next year, Cabangal said, they are looking forward to sponsoring a bamboo bike race that will make Bayawan and Negros Oriental hubs for bamboo craftsmanship.

Bamboo bikes may soon become a big thing in the Philippines through this enterprise.

But apart from the business prospects of this project, Climaco sees an underlying theme that makes this a truly Filipino product

—“kawayan is resilient. Filipinos are like that,” he said.