Interfaith house of prayer to be built in Berlin 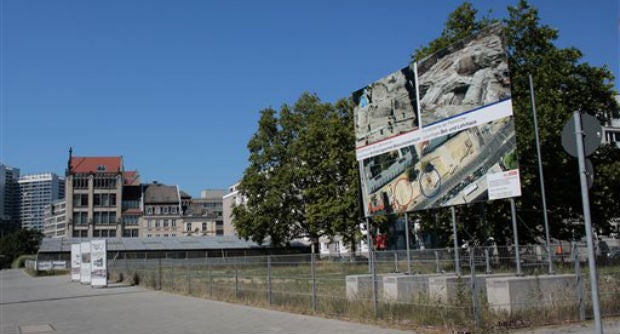 In this Friday, July 4, 2014 photo, the ground of the planned prayer and educational building House of One, is seen in Berlin. House of One will house a Jewish synagogue, a Christian church and a mosque. AP

BERLIN — A rabbi, an imam and a priest start praying together under the same roof. It may sound like the start of a joke, but hopes are high it will become reality in Berlin.

The three men are working together to build a common house of worship — the “House of One” — in the center of the capital that will include a church, a mosque and a synagogue, as well as a joint meeting hall at the center of the building.

“We have noticed, as a community here in the middle of the city, that a lot of people want to meet people from different backgrounds and religions and that there is a strong desire to show that people from different religions can get along,” Pastor Gregor Hohberg of Berlin’s St. Petri parish told The Associated Press. “We want to make a point and show that religions can be a cause of peace.”

Hohberg came up with the idea for the House of One, and teamed with Berlin Rabbi Tovia Ben Chorin and Imam Kadir Sanci. The trio hope Christians, Jews and Muslims will soon study and pray together.

“I believe in the power of dialogue,” said Rabbi Ben Chorin. “In the world we live in we have two possibilities: war or peace. Peace is a process and in order to achieve it, you have to talk to each other.”

The future interfaith meeting place is planned for the Petriplatz square in downtown Berlin. Currently there’s nothing but a few old sycamore trees on a sandy parcel of land that is surrounded by a busy street and old east German tenement buildings.

But the spot has a long history: It is the place where the city was first settled in the 13th century, and for hundreds of years was home to Berlin’s St. Petri church, until it was heavily damaged during World War II and eventually torn down by East German authorities in 1964.

The city, which inherited the plot after the fall of the Berlin Wall in 1989, has already given its OK for the construction of the House of One.

The design by Berlin’s architect company Kuehn Malvezzi envisions a building 40 meters (130 feet) tall with a tower that will be accessible for visitors. The central meeting hall will be able to seat 380 people, with the separate church, synagogue and mosque all adjacent to it.

Construction costs are estimated at 43.5 million euros ($58.3 million), and funding is entirely through donations. In an online crowd-funding campaign, the three clerics are asking people from around the world to contribute by buying bricks for the building for 10 euros ($13.40) each.

Since launching the campaign at the start of June they have received a little more than 35,000 euros ($46,800). The three are also seeking corporate sponsorship and larger donations from private individuals, and the plan is to start construction work in 2016. There is no estimated time of completion.

Meanwhile, believers of the different faiths have already used the future site of the House of One for joint open-air prayers. Last week, around 150 people came together to pray for peace in the Middle East and an end to the conflict between Israel and the Palestinians.

“It is very important for us to overcome all the negative news in the world,” said Imam Sanci. “I have the wish, for my children, my family, for myself and for everyone, that diversity becomes a reality and that people will accept each other in their otherness.”

Read Next
No suspected Ebola case in Hong Kong
EDITORS' PICK
Duterte orders review of conduct of war on drugs
Smart powers Liga Adarna Season 4: Race to the Top
Who is Julian Ongpin?
‘Reporter/commentator’ mauled for stealing fighting cocks
Miss Universe Philippines partners with JC
No evidence to warrant filing of homicide case vs Julian Ongpin – police
MOST READ
Gordon: Senate uncovered ‘mother of all corruption’ under Duterte admin
LOOK: Angel Locsin inspires with weight loss progress
Isko Moreno reaches out to other presidential bets for unity
Who is Julian Ongpin?
Don't miss out on the latest news and information.