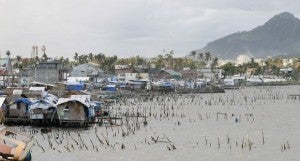 The coastline of Tacloban City on May 7, 2014, still bears scars from the massive damage left by Super Typhoon Yolanda that devastated the central Philippine city six months ago. AFP FILE PHOTO

MANILA, Philippines – Eight months after “Yolanda” ravaged the country, President Benigno Aquino III finally has received a copy of the masterplan for the rehabilitation of areas hit by the world’s strongest typhoon to make landfall.

Lacson completed the masterplan amid calls for him to resign by militant groups.

Yolanda flattened coastal cities in Central Philippines in November 2013 and killed over 6,000 people.

Gov’t slow with cash for ‘Yolanda’–Escudero