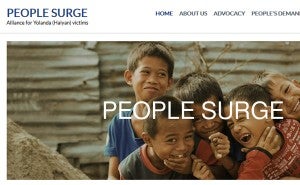 TACLOBAN CITY, Leyte, Philippines —A group composed of supertyphoon “Yolanda victims” in Eastern Visayas is urging rehabilitation czar Panfilo “Ping” Lacson to resign because he seemed to be more focused on the pork barrel scam instead of helping Yolanda victims get back on their feet.

Efleda Bautista, convenor of People Surge, said it has been more than six months since Yolanda devastated many parts of the Visayas but Lacson has so far not extended any assistance to typhoon victims.

“He is useless,” she told the Inquirer in an interview.

The People Surge has been calling on the national government to give each victim P40,000 in cash to enable them to construct their houses and to scrap the no-build zone policy that prohibits residents from constructing their houses within 40 meters from the coastline.

The group also wants the Department of Social Welfare and Development (DSWD) to continue providing relief goods to typhoon victims.

Lacson has been in the limelight lately, not for his job as Yolanda rehabilitation czar but for meddling in the pork barrel mess and providing an unsigned list of 11 senators and 66 congressmen who allegedly benefited from pork barrel scam mastermind Janet Lim-Napoles.

Bautista said the People Surge would like to see Lacson resign as chair of the Presidential Assistance for Recovery and Rehabilitation, an office designated to oversee the rehabilitation of areas hit by Yolanda on Nov. 8, 2013, for being ineffective.

She said several local government units (LGUs) affected by Yolanda had already submitted their master plans to Lacson’s office but until now, these LGUs haven’t received anything.

“That is why these municipal governments have chosen to work with private groups, because they know they will be given immediate assistance, unlike our government which practically has given nothing to the victims,” Bautista said.

She also said the financial assistance extended by Interior Secretary Mar Roxas to mayors of Yolanda-hit areas like Tacloban would not benefit the typhoon victims themselves.

Read Next
[VIDEO] Water purifier in Chile to help 10,000 poor families
EDITORS' PICK
Heads may roll at BOC, says Palace if sugar smugglers are allowed to use recycled import permits
Palace: Biggest supermarkets in PH commit to sell sugar at P70 per kilo
What to watch out for when selecting a video surveillance solution
House energy committee chair Arroyo bats for cheap electricity
vivo brings to the Philippines a powerful smartphone with a slimmer body, the vivo Y02s for only PHP 6,499
DOH reports increase in daily COVID-19 deaths, mostly unvaxxed
MOST READ
Alyssa Valdez to miss Creamline’s AVC Cup campaign
Brian Poe-Llamanzares receives his PhD in Public Administration
Mayor bares issues vs closed QC school
Peso loses ground vs US dollar
Don't miss out on the latest news and information.