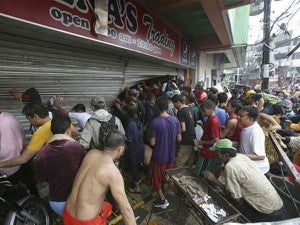 MANILA, Philippines—At any time in areas devastated by super typhoon Yolanda (international name Haiyan) in the Central Visayas region, a mother could be giving birth without a hygienic environment, clean water, sanitized tools, and the necessary medicine.

“Six months after Yolanda, only 50 percent of health facilities have restored services, and some of these facilities are operating in temporary tents, the physical structures have not yet been fully rehabilitated,” Dr. Francesca Cuevas, Director for health of international relief agency Save the Children, said in a press conference Tuesday.

“Pregnant and vulnerable women and children are at risk because they need skilled birth attendants; you cannot really predict the complications occurring during delivery. They need to be near health facilities that have the capacity to provide emergency obstetric care and to be able to practice hygienic practices in clean and safe delivery [environments],” she said.

Asked what were some of the worst cases she has heard of, Cuevas cited cases of women who delivered their babies along the road. There was also a case of a mother whose first pregnancy was caesarean section but with her second, she was not able to get to a health facility in time causing her uterus to rupture which caused her death.

“In isolated areas, access to health services have become more difficult and people don’t prioritize travel to health facilities so we sent teams to these isolated areas instead,” Cuevas said.

According to their estimates, there are at least 2,000 health facilities that have been damaged when Yolanda ravaged provinces in the Visayas region and only half of which have began to operate again.

All the while there are an estimated 750 women giving birth everyday, 100 of which are high-risk pregnancies that require greater medical intervention, Ned Olney, Country Director of Save the Children Philippines, Cuevas said during the briefing.

Save the Children said that an estimated 45,000 babies were born without full medical care in the months following Yolanda.

“We need to restore physical structures, damaged equipment, life saving medicines, equipment for newborn resuscitation, etc. In the Visayas there are still many hospitals that have not been able to recover,” Cuevas said.

As part of their continuing rehabilitation efforts, Save the Children has allocated P10 million for the purchase of “Beacon Boxes” that are stormproof boxes containing all necessary tools and equipment needed in delivering newborn babies.

Beacon is an acronym for “Birthing Essentials and Care of Newborns” and will include plastic sheets, tarpaulin, soap, sterile cord ties, sterile blades, clean towels, a birth certificate, and a lamp.

Olney said that they are looking to preposition these boxes in the most vulnerable areas ahead of the upcoming typhoon season in the Philippines so that trained health personnel will have the essential tools to ensure the safe delivery of newborns even during times of calamity.

Some 2,000 Beacon boxes will be purchased from the P10 million and they are looking to have it stored safely either in the barangay halls, evacuation centers, or local health facilities, Olney said.