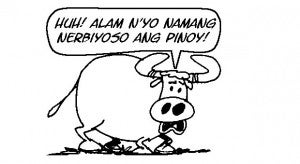 But the sight of an armored personnel carrier escorting five military trucks carrying heavy weapons and equipment in front of Nepa-Q Mart on Edsa in Cubao, Quezon City, alarmed people in the area on Wednesday. Trillanes had hinted about brewing a coup against President Aquino recently.

The military apologized for the alarm, saying the Edsa scene was just a “routine logistical run” and had nothing to do with a coup.

“We apologize for the alarm. We want to assure you that the movement was authorized. These are quick authorized movements, logistical movements of the Armed Forces of the Philippines and these movements are necessary for the administrative and logistical support of our troops in the field,” said Lt. Col. Ramon Zagala, spokesman for the military.

Such movements should be carried out at night, but Zagala said he did not know why supplies had to be moved during the day on Wednesday.

It wasn’t clear which movement caused alarm in Cubao, but people calmed down after learning that the military had explained the sight out of “The Battle of the Bulge.”

Trillanes had been talking about receiving information that retired military generals identified with former President Gloria Macapagal-Arroyo were trying to entice military officials to rise against President Aquino, using such controversial issues as the nullified Disbursement Acceleration Program (DAP) to sow discontent in the officer corps.

There is no recruitment going on for a coup and there’s no need for a loyalty check among the troops, he said.

“The Armed Forces of the Philippines is loyal to the chain of command. We will remain partisan-free and professional,” Zagala said.

Trillanes began playing down his own coup talk on Wednesday, saying the retired generals’ overtures had been rejected.

“There’s nothing to worry about. This has not progressed into anything serious precisely because nobody was paying attention to them, nobody was biting,” Trillanes told reporters.

“He can ignore this,” he said.

The President did just that, according to Malacañang.

Presidential spokesman Edwin Lacierda said the government was confident that there was no restiveness in the military.

Lacierda said Trillanes was “free to express his opinion and we respect him for that.”

He said it was normal for retired military officials to meet and talk politics. “But we really have not monitored any meetings to overthrow the government,” he said.

Trillanes said he had no information as to who was behind the retired officers’ efforts.

Even if the retired officers were close to a former President, it might be another personage who was urging them to try to sow discord in the military, he said.

He said he would leave it up to the security agencies to validate the information and to check it out.

Letting out more details, Trillanes said the retired military officers had been trying to move the destabilization plot since the first and second years of the Aquino administration. They would stop, then resume their efforts depending on the political environment, he said.

Trillanes said the retired officers would start with social invitations, which would lead to discussions that they would use to gauge the pulse of the officers and check if they were disgruntled.

“But what happens is that these invitations and the discussions are reported,” he added.

Sources from the intelligence community told the Inquirer in separate interviews that they had not monitored any destabilization plot against President Aquino.

One of the sources said that even if there was talk of a coup among the retired officers, they themselves knew that an attempt would fail.

“There’s the usual talk but there is no capability. Those are two different things,” the source said.

The source said there was no critical mass against the administration despite the harsh criticism against President Aquino over the DAP, an economic stimulus program that the Supreme Court had struck down.

The information has been passed on to National Security Adviser Cesar Garcia, who believed “there was nothing to worry about,” the source said.

Retired AFP Chief of Staff Gen. Hermogenes Esperon, known to be a close ally of Arroyo, told the Inquirer in a telephone interview that he had not heard of any destabilization plot against President Aquino.

Esperon said his fellow military officers, both retired and in active service, had been calling him up since Wednesday morning “asking me who is this instant expert on a lot of things,” a reference to Trillanes.

“I told them, I don’t want to prejudge him but I had been an intelligence officer. If I have information, I process it. I don’t come out in the media and blurt out what could be speculations. I didn’t become a counterintelligence officer during President Cory’s time to react right away to information I received,” Esperon said.

He said he and fellow retired officers met regularly and played golf, but there was nothing sinister about their gatherings even if the talk was about current issues like the DAP.

Esperon described his conversations with fellow retired officers as “constructive.”

Irked by Trillanes’ repeated reference to retired military officers identified with Arroyo, Esperon said the senator was a whiner and likened him to the boy who cried wolf.

“It looks like his information is lacking. I think he is what they call the boy who cried wolf. The boy killed the wolf and emerged in the morning as the hero,” Esperon said in Filipino.

“I would like to call them whiners,” Esperon said, referring to Trillanes’ group Magdalo, which was behind the failed junior officers’ mutiny against Arroyo in 2003.

“They are the types who march on Makati and occupy Oakwood after hearing that soldier’s boots had been damaged in the field,” he said, referring to the daylong occupation by Trillanes’ group of a residential building in Makati City during that mutiny.

No reason for coup

Esperon said he believed there was no reason for soldiers to stage a coup, as even the retired officers themselves had been reminding those in the active service that their primary mission was to defend the Constitution and the country’s territory and sovereignty.

He said Trillanes, instead of sowing intrigue, should explain how he spent the funds he had received from the DAP.

Another source said some retired officers had been talking about some reported kinks in the retirement fund and this may have been misconstrued as expressing dissatisfaction with the government.

“Some may have seen them talking in restaurants,” the source said, adding that the coup talk could be an attempt to agitate people.

Even military officials in faraway Mindanao said they had not monitored the presence of retired generals rallying support from the troops for a coup against President Aquino.

Brig. Gen. Edmundo Pangilinan, commander of the Army’s 6th Infantry Division based in Maguindanao, told the Inquirer that his command was intact and stood solidly behind the Aquino administration.

Capt. Alberto Caber, public information chief of the military’s Eastern Mindanao Command based in Davao City, said the command had not monitored the presence of retired military officials in its area.

But members of the House of Representatives who are former military or police officers said Wednesday that they were worried about reports of a destabilization plot involving retired military officials of the Arroyo administration.

They said, however, that they did not believe a plot against President Aquino would prosper.

The “Saturday group,” as the congressmen call themselves, told a news conference that intelligence and security agencies should verify Trillanes’ talk of a brewing coup against Aquino.

“This is a signal to the intelligence agencies to do their job,” said Antipolo Rep. Romeo Acop, a retired police director.

Magdalo Rep. Francisco Ashley Acedillo, one of the junior officers who joined Trillanes in the Oakwood mutiny, said he also had received information about the destabilization plot.

But like Trillanes, Acedillo said he was not sure about his information.

“Our difficulty there is how to ascertain the source of the information,” he said.

Still, he said his group viewed the matter with grave concern, but added, “I don’t think at this point that this will prosper.”