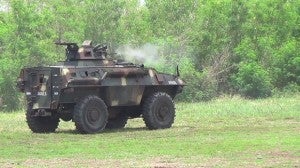 An APC during military exercises in Fort Magsaysay in Tarlac in May this year. RYAN LEAGOGO/INQUIRER.net

But the military was quick to dismiss the presence of an APC on the southbound lane of Edsa near the Nepa Q-Mart in Quezon City, saying it was on a “routine” operation.

“These are authorized movements, logistical movements of the AFP,” said Lieutenant Colonel Ramon Zagala, Armed Forces of the Philippines Public Affairs Office Chief, who apologized to the public for the panic it caused.

“We apologize to our countrymen if we have caused alarm, these are movements necessary for administrative and logistical support for our troops in the field.”

He added that all movements that the military carries out are all coordinated within the general headquarters in Camp Aguinaldo.

On Tuesday, Trillanes said that retired generals are plotting to overthrow the Aquino presidency and that they are recruiting active members of the AFP to join them in their cause.

Immediately after Trillanes’ claims, the AFP denounced it saying that the active members of the military are all “professional” and would not join in any destabilization.

Zagala said that the APC’s were from Metro Manila and two groups went to the areas of the Southern Luzon Command and Northern Luzon Command to pick up supplies to be stored in the Army Support Command in Fort Bonifacio in Taguig.

He, however, did not disclose where in Metro Manila the troops came from.

Trucks carrying the troops had “critical items,” Zagala said, inside them during the movement and that APC’s were required to escort them to avoid any confrontation on the way.

“It’s important that they are escorted to avoid any problems such as attacks on the convoy itself because the items being moved are critical items,” Zagala said.

He added that the convoy left the Solcom area Wednesday morning and that it was unfortunate that it got caught in Metro Manila traffic en route to the Army Support Command.