But Almendras claims everything in detail
By: Carmel Loise Matus, DJ Yap, Leila B. Salaverria - @inquirerdotnet
Inquirer Visayas / 03:15 AM July 31, 2014 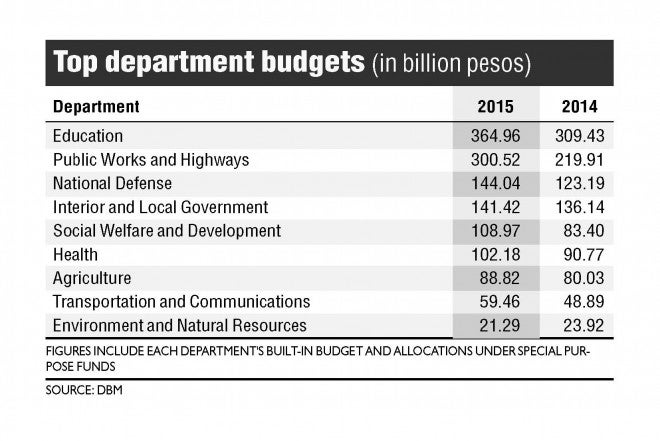 MANILA, Philippines–“Lump sum” items amounted to P501 billion in the proposed P2.606-trillion national budget for 2015 that Malacañang submitted to the House of Representatives on Wednesday.

The proposed budget is up 15 percent from last year’s budget of P2.265 trillion, reflecting the jump in the administration’s assumption of a 7- to 8-percent growth in gross domestic product next year.

Earlier however, Cabinet Secretary Jose Rene Almendras said everything was detailed in the proposed national budget.

“There are no lump sum amounts,” Almendras said at a forum organized by the Kapisanan ng mga Brodkaster ng Pilipinas (KBP) Cebu Chapter in Cebu City.

Lump sum is a phrase associated with the graft-ridden Priority Development Assistance Fund (PDAF) and Disbursement Acceleration Program (DAP) that lawmakers and President Aquino had used at their discretion, respectively, before the Supreme Court declared the PDAF and the DAP unconstitutional.

In behalf of the President, Budget Secretary Florencio Abad formally presented the proposed budget, contained in six thick volumes, to Speaker Feliciano Belmonte Jr. and other leaders in the chamber, which would now deliberate on the expenditure program in the next few months.

“The Aquino administration crafted this proposed P2.606-trillion national budget for 2015 anchored on the premise that no one, especially the poor and vulnerable, should be left behind,” said a primer of the Department of Budget and Management (DBM).

Abad said a total of P501.670 billion was to be set aside as Special Purpose Funds (SPF) under the proposed national expenditure program prepared by his department for next year.

The funds are budgetary allocations in the General Appropriations Act (GAA) that are allocated for specific purposes, according to the DBM.

“These are usually lump sum in nature, as the recipient departments or agencies and/or the specific programs and projects have not yet been identified during budget preparation and legislation.

“These are then made available for allocation to agencies in addition to their built-in appropriations during budget execution,” it said.

At a press conference, Abad said the SPF shall be used for “calamity funds, contingency funds, miscellaneous personnel benefit funds, pension and guarantee funds, the Internal Revenue Allotment (for local government units), debt service or interest payments” and other items.

“The total amount that pertains to the Special Purpose Funds that I mentioned is P501.670 billion, or about 29 percent of the new General Appropriations Act. The rest are department and agency budgets,” he said.

The budget secretary deflected questions about the lump sum appropriations by saying the proposed budget had already been “disaggregated.”

“That’s why you can see there are six volumes of it, because it’s almost completely disaggregated with respect to important programs that benefit the communities,” he said.

There were only four volumes of the proposed budget last year.

“So, there’s very little lump sum unless it’s necessary, for example, calamity funds [which cannot be a line item because] you cannot predict what’s going to happen,” he said.

Abad said the proposed budget, for the first time, used a budget priorities framework that defined the investments of government both in terms of sectors or programs and geographical areas.

For example, he said, 37 percent of the budget was for social services, such as the conditional cash transfer (CCT) program, basic education, public health and social housing, while about 27 percent was for economic services, the biggest chunk of which goes to infrastructure with almost P600 billion.

In Cebu City, Almendras announced the adoption of the outcome-based performance informed budgeting (PIB) strategy in the proposed national budget.

The PIB is a scheme that uses performance information to assist in deciding where the funds will go.

The PIB, according to Almendras, is different from the traditional line item-based budgeting as it focuses more on outputs and outcomes, and places less emphasis on inputs.

Almendras said the shift to PIB was in line with the Aquino administration’s goal to strengthen the link between planning and budgeting and to simplify the presentation of the budget to make it more understandable to the public.

In response to the Supreme Court ruling declaring the DAP unconstitutional, the proposed budget refined the definition and use of “savings.”

In the President’s budget message, salient points of which were released to the media, the administration asked Congress to impose a one-year validity of appropriations, effectively disallowing the budgets intended for the year to “carry over” to the succeeding year.

“This encourages departments and agencies to utilize their allocated funds as early as possible, rather than to postpone the implementation of programs and projects to the following year,” the DBM said.

Abad said the administration also sought Congress to allow the declaration of savings “by the end of the first semester—a realistic timeframe, as it gives enough time for the implementation of augmented programs and projects.”

“The policy right now is after giving them [agencies] five months of this year the opportunity to begin the process of procurement, we give them the first semester of the following year to obligate,” he told reporters.

“If they’re not able to obligate the allotments released to them, then that’s when, at the end of June 30, we make declaration as to whether there are unobligated appropriations or unreleased appropriations” in consultation with agencies concerned, Abad said.

He said that it was within the power of Congress to legislate the definition of savings, and that the Supreme Court recognized such a right.

Belmonte agreed. “I would agree with the budget secretary on one thing, the term savings has no constitutional definition, and not having any, it is up to us to legislate the proper definition, the proper applicability of it and so forth, how far it extends, how law extends to the use of unprogrammed funds, at what point you can use it.”

Senate President Franklin Drilon shared the same view, saying that Congress has the prerogative to review and revise the definition of savings.

Drilon said one point that could be considered was to redefine it in a way that would allow officials to declare and use these even before the end of the year.

He said that when projects were abandoned or there was a change in priorities and some projects were shelved, the appropriations for these should be made available to augment other items in the budget.

“The very strict and literal interpretation of the term savings, to me, can be reviewed,” he added.

No definition of savings

Drilon said, though, that the Senate had no new definition of the term savings yet.

“I do not know yet, because it was the President’s idea. We will know the proposed definition from Malacañang,” he said when asked how Congress sought to define savings.

In his State of the Nation Address on Monday, Aquino asked Congress to issue a joint resolution that would clarify the concepts and definitions concerning government savings, and to approve a supplemental budget to fund the projects that used to be covered by the DAP.

But Sen. Nancy Binay expressed misgivings about allowing the declaration and use of savings even before the end of the year.

Binay said that when officials submitted project proposals for the budget, they should know that these were doable within the year.

Officials should be doing the paperwork and other necessary acts to ensure the projects funded under the budget would be completed, she said.

She also said that in redefining savings, it should be clarified when these could be declared. There should also be a penalty against the practice of declaring forced savings, or deliberately delaying or sidelining a project so that savings could be declared using its allocated funds.

Asked to comment on the proposed budget, House Minority Leader Ronaldo Zamora said he had not taken a good look at it but noted that “the amount is quite large.”

“It doesn’t even include unprogrammed funds. So that’s one of the first things we will ask: Where do we get the money to fund these? And as we go into general debate, these are the questions that will be asked. Obviously, we will be looking into individual programs,” he said.

Zamora cited in particular the CCT program. “I am uncertain even now, after six years of CCT, whether the program is as effective as it should be. Or should we not be looking at CCT less as a dole but more as a job-generating program, which is longer term and more sustainable in terms of growth pattern in mind?”