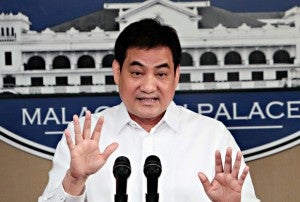 MANILA, Philippines – Malacañang on Wednesday said it was unfazed by rumors of a coup d’état against President Benigno Aquino III since it is confident that the men and women of the Armed Forces of the Philippines (AFP) were satisfied with the government

“The reason for the lack of interest is, I think, primarily the reforms that the Aquino administration has already implemented with respect to the armed forces. We have provided mission-essential equipment to the people on the ground,” Presidential Spokesperson Edwin Lacierda said when prodded about the issue.

He also said there would be no loyalty check among the members of the military since “there is no issue.”

“There is no such truth to the coup rumors,” Lacierda said.

Communications Secretary Herminio Coloma Jr. earlier said that while the President has received death threats, they are not considered serious.

Senator Antonio Trillanes earlier said that he received word about retired generals planning to destabilize the government through the help of active members of the AFP. But AFP spokesperson Lieutenant Colonel Ramon Zagala said there were no such reports.

He said as far as the rank-and-file personnel of the AFP were concerned, they were not being recruited into any destabilization plot.

“We have provided housing units. We have modernized the AFP. These are the measures that we have implemented in order to strengthen our Armed Forces of the Philippines. And the rank and file realize and do recognize and appreciate the efforts of the Aquino administration in this respect,” Lacierda added.

“Certainly, Senator Trillanes is free to express his views and his concerns and we appreciate the senator for his concern,” he said.