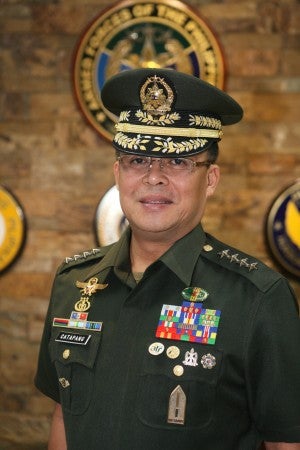 MANILA, Philippines–Newly-appointed Armed Forces of the Philippines (AFP) Chief of Staff General Gregorio Pio Catapang Jr. said there was no intelligence report of any destabilization plot against the Aquino administration, saying the military’s morale now is “high.”

“There’s no intelligence on that,” Catapang told reporters after attending a Senate hearing on Wednesday.

Colonel Ramon Zagala, Public Information Chief of the AFP also denied that there are coup plots against Aquino.

“We remain partisan-free and professional,” Zagala said in an interview over Radyo Inquirer 990AM.

When asked about possible coup threat from retired and inactive members of the military, Zagala said they have not monitored any activity of its possibility among them.

But he said, retired and inactive members of the military are now civilians and have regained their freedom of expression and assembly.

“They have already regained their freedom of expression and it is not the policy of the AFP to curtail anybody’s right,” he said.

“We will not curtail their rights,” he added.

He mentioned that there are some who are “disgruntled” but was quick to say that it is “just a mere expression” and would not transform into a possible coup threat.

Catapang, meanwhile, said there was no need to conduct a loyalty check since the soldiers remain loyal to their Commander-in-Chief.