Aquino says critics against beneficiaries of his administration 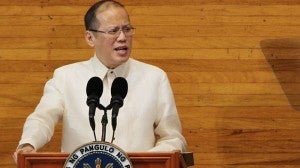 MANILA, Philippines–President Benigno Aquino III chastised his critics in his fifth State of the Nation Address (Sona), saying they are against those who benefited in his platform of good governance.

Aquino said if his critics are against him, they are also against the informal settlers who benefited in the relocation programs, the Muslims who will benefit in the peace accord, students who benefited in the the courses offered by the Technical Education and Skills Development Authority (Tesda), and victims of storms who were rescued from harm.

Militant solons walk out even before Aquino starts Sona