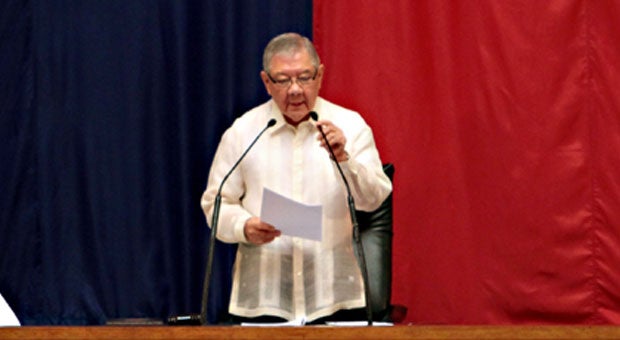 Speaker of the House Sonny Belmonte opens the regular session of the 16th Congress on Monday prior to President Benigno S. Aquino III State of the Nation Address at the House of Representative in Quezon City.
INQUIRER PHOTO / GRIG C. MONTEGRANDE

MANILA, Philippines—House Speaker Feliciano Belmonte Jr. pushed Monday for the creation of a “public accounts and audit committee” with the power to watch over the spending of all government agencies as an exercise of legislative oversight.

Speaking at the opening of the second regular session of the 16th Congress on Monday, hours ahead of the President’s State of the Nation Address, Belmonte noted that Congress held the power of the purse, which constituted both the power to appropriate and the power of legislative oversight.

“We must now exercise these in order to strengthen accountability mechanisms and ensure the proper and lawful allocation and utilization of public funds,” he said.

Belmonte ordered the House committee on rules to study the creation of a public accounts committee “with jurisdiction to call and hold to account all national government agencies, local government units, government-owned and controlled corporations, and other government instrumentalities for their use of public funds, and to undertake legislative action to improve transparency of government operations.”

These indicate possible misuse of public funds and inefficient public spending, he said.

“This should concern us, as representatives of the people, since we gave government the authority to collect tax money from them whom we swore to serve,” Belmonte told the plenary.

Cavite Rep. Elpidio Barzaga Jr., an administration ally, said he thought the proposal was a good one.

“However I think there will be resistance,” he told reporters.

He said Belmonte’s suggestion also involved local government units, who “will argue that they get their budget from local funding and the IRA [Internal Revenue Allotment],’’ he said.”The House does not provide specific budgets to the LGUs.”

Also, “there is the credibility factor,” Barzaga said. “Even if we have the best intentions, this will be construed as political propaganda in the spirit of public accountability and transparency. People will not [easily trust our intentions] considering the findings on PDAF (Priority Development and Assistance Fund) and DAP (Disbursement Acceleration Program).”

Both the PDAF, or the congressional pork barrel, and the DAP, an economic stimulus package introduced by the executive in 2011, were stricken down as unconstitutional last year and in July, respectively, by the Supreme Court.

“The investigator and judge must be impartial. They need to have a clean record, in order that their findings are credible. Unfortunately we don’t have that insofar as the impression of public is concerned,” Barzaga said.

PSEi slips ahead of Sona