SONA protesters kept at bay at Ever Gotesco by 6 layers of barriers, cops 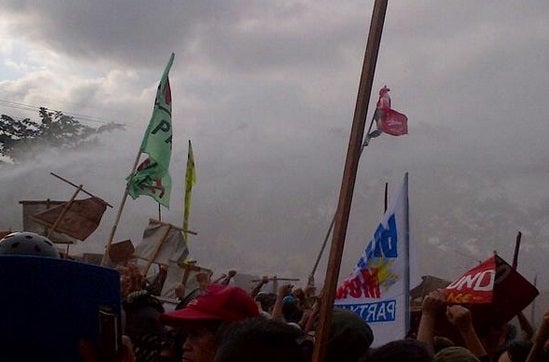 Police use water cannons at protests in Commonwealth. Frances Mangosing/INQUIRER.net

MANILA, Philippines—Six layers of barriers, including phalanxes of anti-riot policemen, along the Fairview-bound side of Commonwealth Avenue confined State of the Nation Address (SONA) protesters in front of the Ever Gotesco Mall.

It was only the authorities’ first line of defense along the major thoroughfare leading to the Batasan Complex.

Four massive steel containers composed the sixth layer of barriers. A fifth container was placed on standby, tied to a lift, to completely seal Commonwealth Avenue should the protesters break through the first five barriers.

At least three Bureau of Fire Protection trucks were parked close to the containers for contingency.