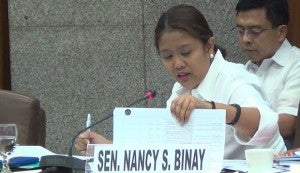 MANILA—Health Secretary Enrique Ona has expressed disappointment with Sen. Nancy Binay, who questioned the allocation of P70 million under Disbursement Acceleration Program for a stem cell research project of the Lung Center of the Philippines.

Binay had said the money could have been better spent on more beds for government hospitals.

“I’m so disappointed with the Senator… rather than support the opportunities for our doctors to do all types of research, not just on stem cell… Filipinos can jumpstart medical research, comparing it with research capacity of other countries—that’s what I would want to hear from her,” Ona said Friday on the sidelines of the Department of Health’s distribution of awards to the unsung heroes of Typhoon Yolanda.

“And I also wish to tell her, I hope she increases the funds for  various research being conducted by our doctors,” he added. “Because if not, these doctors may just opt to work in other countries.”

According to Ona, medical research is important and its significance should not be compared to the lack of hospital beds.

“I hope they don’t simplify medical research with [the number of] beds,” he said, adding that those making such comments appeared to have limited knowledge in medicine.

Explaining stem cell research, Ona said he was looking at preventive, promotive, curative and even rehabilitation needs of the entire health sector.

The stem cell project, which is under the Lung Center of the Philippines, consisted of a laboratory also used for stem cell research, he said.

The instruments there would be used for other purposes and the research may help deal with other illnesses, he added.

“The research that we do at the Lung Center includes the use of stem cells to cure lung disease, including cancer of the lungs,  COPD (chronic obstructive pulmonary disease), as well as other illnesses,” Ona said.

Nancy Binay gets praises for grilling Abad over DAP