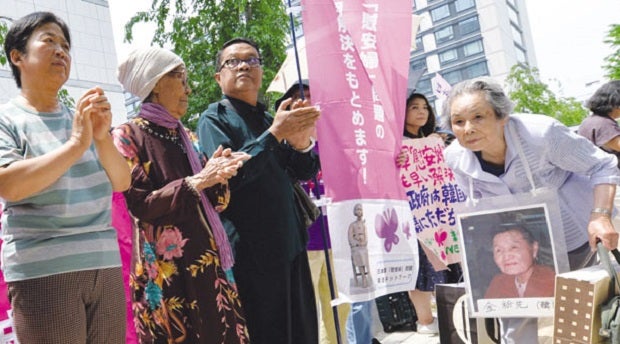 Former “comfort women” and their relativs gather to stage a standing demonstration near the Diet, or parliament, in Tokyo on June 2, 2014 to demand that Japan formally atone for forcing women into sexual slavery in its wartime military brothels. The Asian Solidarity Conference, which met starting from May 31 in Tokyo, has been held 12 times since 1992 to press the Japanese government to admit responsibility for allegedly coercing thousands of women into providing sex to Japanese imperial army soldiers across the region. AFP/KAZUHIRO NOGI

TOKYO – Japan on Friday rejected a call by a UN watchdog to accept full blame for pressing Asian women into wartime sexual slavery in military brothels, saying it was not obligated to do so.

The United Nations Human Rights Committee in Geneva on Thursday called on Japan to take responsibility for its use of so-called “comfort women” during World War II.

Japan’s foreign ministry said the UN committee was expected to adhere to the International Covenant on Civil and Political Rights which Tokyo ratified in 1979.

“The covenant is not supposed to be applied to issues, including the comfort women issue, dating back further than that time (1979),” an official at the ministry’s press division said.

Tokyo issued a landmark apology in 1993 — called the Kono Statement after then top government spokesman Yohei Kono who announced it.

The statement acknowledged the military’s involvement in the coercive brothel system but did not admit the government’s complicity in it.

But a tranche of the political right, including Prime Minister Shinzo Abe, continue to cast doubt, claiming the brothels were staffed by professional prostitutes.

Japan recently held a review of the issue which upheld the apology but asserted there was no evidence to corroborate the women’s testimony on sex slavery, sparking regional anger.

With few official records available, many researchers have estimated around 200,000 women, mostly from Korea but also from China, Indonesia, the Philippines and Taiwan, served Japanese soldiers in “comfort stations”.

Japan previously offered money to former comfort women through a private fund set up in 1995 that ran until 2007.

But some survivors refused the cash because it did not come directly from the government.