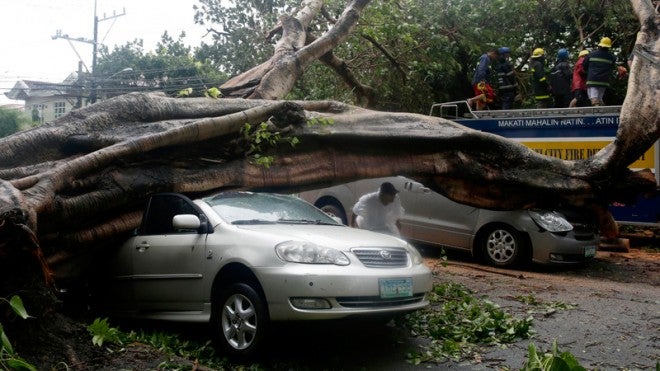 Firemen remove the branches from a fallen tree which fell on two cars at the onslaught of Typhoon Rammasun (locally known as Glenda) which battered Makati city, east of Manila, Philippines Wednesday, July 16, 2014. AP FILE PHOTO

Reports of fatalities continued to come in as repair men struggled to restore electricity to hundreds of thousands of households still without power since the storm hit last week.

The typhoon, known internationally as Rammasun (god of thunder in Thai), has since blown into southern China where it has killed 17 people.

The majority of the Filipino fatalities were killed by falling debris and trees while many of the missing were on boats that went out to sea despite the storm, said Mina Marasigan, spokesperson of the National Disaster Risk Reduction and Management Council (NDRRMC).

As a result, the head of Calabarzon’s disaster management agency asked national disaster officials to include people who live near big trees and big structures in the preemptive evacuation plan the next time a typhoon strikes.

At present, only those who live in coastal and low-lying communities are ordered to evacuate during extreme weather.

Most of the 67 people who were killed and 107 who were hurt in Calabarzon perished or were injured after being hit by uprooted trees, collapsed walls, falling roofs and debris. Others died from either drowning, landslides or heart attacks.

“Those living near large structures like billboards, walls, electric and communication posts, as well as trees, should also be warned and encouraged to evacuate,” Calabarzon Regional Risk Reduction and Management Council Director Vicente Tomazar said in his latest report to the disaster council.

As of Sunday, at least six more people were feared dead while at least 317 others were reported hurt from Glenda’s onslaught in Luzon and parts of the Visayas, authorities said.

Other casualties were from Central Luzon (8 dead), Bicol (6), Mimaropa and Eastern Visayas (5 each), Metro Manila (2) and Western Visayas (1).

Eastern Visayas reported the biggest number of injuries with at least 122 persons reported hurt, followed by Calabarzon with 107 persons treated for injuries sustained during the typhoon.

The latest official estimate of damage to property in seven affected regions rose to P7.3 billion as of Sunday, according to the NDRRMC.

This did not include the damage to agriculture sustained in Calabarzon.

In Calabarzon, at least 106,539 houses were reported destroyed while damage to property has been initially estimated at P661.37 million. Many areas in Quezon, Laguna and Batangas had not yet submitted damage reports due to communication problems.

The Calabarzon disaster agency also asked the national government to come up with an “emergency communications strategy” during typhoons.

“The storm crippled telecommunications facilities, disrupting emergency services,” Tomazar said. Due to this, information at higher levels was limited, he added, saying that disaster authorities in Calabarzon could not even access the weather bureau for forecasts at the height of Glenda’s onslaught.

Tomazar said current disaster management plans and protocols “fell short” since their disaster teams were “overwhelmed” by the extent of Glenda’s destruction.

Interior Secretary Mar Roxas, however, trumpeted the “low death toll” from the typhoon, saying that this was “an indication that we are becoming better prepared.”

One death too many

While noting that the death count was low, Roxas stressed that “one death is one too many,” as he pressured LGUs to work harder to achieve the zero casualty target of the NDRRMC.

Roxas, also the vice chair for preparedness of the NDRRMC, extended his condolences to the families of the fatalities.

“I extend my sympathies to the families and at the same time, I appeal to the LGUs to improve their disaster risk reduction plans for their communities to be safer and better,” he added.

He cited the Albay provincial government, which did not register any deaths, for its effective disaster risk reduction and management plan, especially in vulnerable areas.

“The disaster readiness of Albay and other LGUs in the Bicol area is something worth emulating,” Roxas said.