Cut in security brings informal settlers back to rail tracks 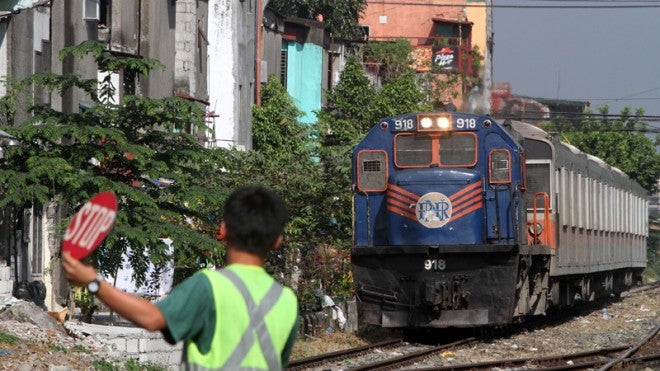 File photo of a train approaching the España Station in Manila on Thursday. Informal settlers and illegal structures are coming back to the idle properties of the North Luzon Railways Corp. (NorthRail) from Caloocan City to Clark Field, Pampanga, because of senior management’s decision to save a few millions in security costs. INQUIRER PHOTO / NIÑO JESUS ORBETA

MANILA, Philippines–Informal settlers and illegal structures are coming back to the idle properties of the North Luzon Railways Corp. (NorthRail) from Caloocan City to Clark Field, Pampanga, because of senior management’s decision to save a few millions in security costs.

This after the government had put billions into one of the country’s biggest relocation efforts of informal settlers.

In the 2013 annual audit report of the state-run rail company released last week, the Commission on Audit (COA) questioned the NorthRail board’s decision to cut down on the number of guards protecting its 76-kilometer-long rail tracks to a third of the original security force.

The COA said that as part of cost-cutting measures, NorthRail decided to reduce the security provided by Variance Protective and Security Agency Corp., from 236 guards in 2010 to 142 (divided into three-hour shifts) in March this year and down to 80 starting next year.

“While the board found it necessary to implement cost-cutting measures, this should be done without sacrificing the security of the Row (right of way), otherwise in the long run, it is likely that whatever savings generated from the reduction of guards may not be enough to cover clearing operations brought about by encroachments of ISF (informal settler families),” said the COA, which recommended the NorthRail board “revisit its policy on the posting of guards or implement other measures to compensate for the lack or reduction of guards [such as] increased number of site inspections.”

Its website showed the NorthRail board is led by Conrado K. Tolentino as president and Jesus Enrico Moises B. Salazar as vice president.

In its report, the COA noted that informal settlers had started to take up residence and illegal structures had been erected along the Row of the Philippine National Railways-NorthRail based on inspections conducted by its agents in December last year and March this year.

“Although a great deal of funding and effort were exerted in the clearing operations, the Row is still not 100 percent free of encroachments. These structures, if left unchecked and unattended, may give rise to ISF colonies,” the COA said.

The COA recommended that NorthRail demolish the remaining structures along the Row “no matter how few or small, in order to mitigate the risks of encroachments.”

In its reply, NorthRail agreed to implement new measures to secure its properties and increase its site inspections along with the security force to deter intruders.

“Installation of concrete monuments along Row boundaries is now ongoing. Management is also planning to conduct grass-cutting activities. These will make the security provider more efficient in securing the Row. On the remaining structures, NorthRail cannot proceed with the demolition and clearing of structures without an approved design for the North South Commuter Railway Project,” said NorthRail in its reply to COA.

NorthRail management also explained that they allowed some temporary structures in its properties to “maintain good relationship with the barangay and the concerned local government units to prevent difficulty in securing necessary permits and assistance from them by the time that the project will already be implemented.”

The COA has likewise criticized NorthRail for languishing in a “pre-operating stage after two decades from its creation.”

NorthRail was formed in 1994 with an initial funding of P1.5 billion to kick-start the construction of a mass transport railway system that would interconnect the former baselands from Metro Manila (Fort Bonifacio) to Central (Clark and Subic) and Northern Luzon (Poro Point).

NorthRail remains in limbo after the DOTC decided two years ago to discontinue its $593.88 million deal with China National Machinery Industry Corp. (Sinomach) “due to serious legal considerations and problems in the contract” which was granted without any bidding. The contract is currently under arbitration in the Hong Kong International Arbitration Center.