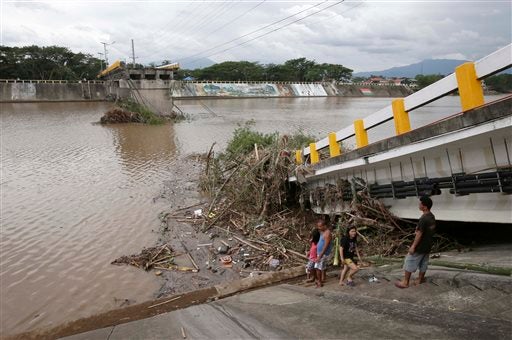 Residents watch a collapsed bridge in Batangas city, 100 kilometers (62 miles) south of Manila, Thursday, July 17, 2014. A portion of the bridge collapsed Wednesday at the onslaught of Typhoon Rammasun which battered central and northern Philippines leaving dozens of people dead, knocking out power in many areas and damaging agriculture and infrastructure. AP PHOTO/BULLIT MARQUEZ

MANILA, Philippines–Residents of Albay province in Bicol got down to work clearing typhoon debris on Thursday, but without any complaint. No one died as Typhoon “Glenda” came ashore late on Tuesday and swept across the province during the night.

Albay Gov. Joey Salceda credited the residents themselves for the zero casualty.

“Taking care of themselves has become ordinary, as taking a bath or eating,” Salceda said.

He said communication and training had made the residents aware of the risks in times of disaster.

Salceda said zero casualty was now also the goal for the other Bicol provinces—Camarines Sur, Camarines Norte, Sorsogon and Catanduanes.

In Catanduanes, the three fishermen earlier reported missing returned home on Thursday. They said they took shelter in the coastal town of Panganiban as Glenda approached on Tuesday.

But elsewhere, 40 people died and four others went missing as Glenda swept across eastern and southern Luzon.

Most of the people who died were outdoors, killed by fallen trees, collapsing buildings and flying debris, according to the  National Disaster Risk Reduction and Management Council (NDRRMC).

Glenda (international name: Rammasun) left the Philippine area of responsibility around 10 a.m. Thursday  after cutting a wide path of destruction across seven regions, shutting down the capital and knocking down trees and power lines, causing widespread blackouts.

Most schools remained closed in Metro Manila and southern Luzon on Thursday.

Power had been restored to just over half the Luzon grid, according to the National Grid Corp. of the Philippines (NGCP).

Electricity distributor Manila Electric Co. (Meralco) said 35.3 percent of its 1.88 million customers in the capital and surrounding provinces were without power.

Parts of Manila, Makati, Quezon City, Pasay and Bulacan province were affected by the power rotation.

Later on Thursday, Meralco said power would be fully restored in Metro Manila by 10 p.m. Friday and only 4 percent, or 230,000 customers, south of the capital would remain without electricity.

The first major typhoon to hit the Philippines this rainy season destroyed about 7,000 houses and damaged 19,000 others, according to Alexander Pama, executive director of the NDRRMC.

Social welfare officials said the typhoon, which struck the country with top winds of 150 kilometers per hour and gusts of up to 180 kph, affected 881,826 people, of whom 525,791 remained in evacuation centers on Thursday.

Initial reports from the Department of Agriculture placed the damage to agriculture at P2.32 billion in 15 provinces across four regions.

Agriculture Secretary Proceso Alcala told a news briefing on Thursday that the biggest damage to any subsector was in fisheries, which reported damage of P810 million.

Alcala said aqua-fisheries operations bore the brunt of Glenda, especially those in Laguna de Bay and Taal in Batangas province as well as those in Pampanga and Bataan provinces.

Among crops, Alcala said rice suffered the biggest damage, P512.7 million, which was equivalent to 80,781 tons.

Glenda wreaked havoc on 43,536 hectares of rice farms, more than half of which Alcala said had “a chance for recovery.”

Most deaths from Calabarzon

Two of the four people missing are from Quezon province. The other two are from Batangas and Marinduque provinces.

The regional Office of Civil Defense said clearing and restoration work, including efforts to bring back electricity, began as the weather improved on Thursday.

Most roads earlier reported to be impassable due to fallen trees and other typhoon debris had been cleared, except for the Sogod-Tiwi section of the Ligao-Tabaco road in Albay, the Sipocot-Barcelonita road in Camarines Sur, and the Tawad-Balud road in Masbate province.

The agriculture department placed the agricultural damage in the whole Bicol Region at P1.1 billion.

In Masbate, damage to livestock amounted to P516,000 and damage to agricultural infrastructure came up to P123.2 million.

Bureau of Fisheries and Aquatic Resources Director Dennis del Socorro said partial damage to fisheries as of Tuesday was P38.5 million for the whole Bicol Region.

In Calabarzon, authorities still had to estimate damage to infrastructure and agriculture, as communication remained down in some parts of the region.

Civil defense, social welfare and home affairs officials made an aerial survey of the damage in Southern Tagalog on Thursday.

Water up in Angat

Work at the Bulacan provincial capitol resumed Thursday despite the rotating brownouts.

Classes also resumed at Bulacan State University, but classes in elementary and high schools remain suspended due to power outages.

Most towns in Bataan province also had blackouts.

In Pangasinan province, Dagupan City and neighboring towns were hit by an unscheduled two-hour power interruption.

In the Cordillera region, portions of the Bontoc-Banaue Road in Mountain Province remained impassable, according to the regional civil defense office.

Policemen were helping local governments in relief and rehabilitation work.

Chief Supt. Reuben Theodore Sindac, spokesman for the Philippine National Police, said the helping hand was a departure from the PNP’s usual search-and-rescue operations during disasters.

“Our personnel are more involved in relief and rehabilitation operations, like cleanup of roads to make these passable, securing areas that need to be secured like evacuation centers,” Sindac said.

Power in parts of Luzon, Bicol seen back by end of July