Think of it as romantic dinner for next 2 weeks in S. Luzon | Inquirer News

Think of it as romantic dinner for next 2 weeks in S. Luzon 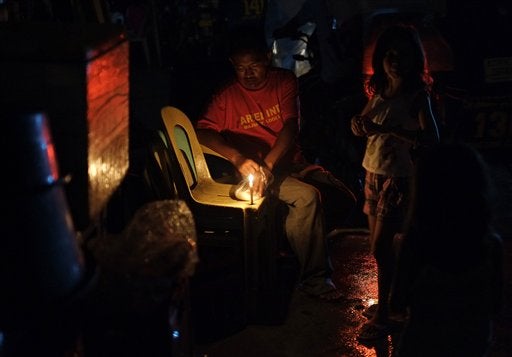 A Filipino resident uses a candle while eating outside their house in suburban Quezon City on Thursday July 17, 2014 a day after strong winds from Typhoon Glenda toppled several electric posts and infrastructures in its path. Eating dinner by candle light or kerosene lamp will be the norm for many people in the Bicol Region, Quezon province, Calabarzon and parts of Pampanga province until early next month. AP PHOTO/AARON FAVILA

MANILA, Philippines–Eating dinner by candle light or kerosene lamp will be the norm for many people in the Bicol Region, Quezon province, Calabarzon and parts of Pampanga province until early next month.

The Department of Energy on Thursday said that it would take at least two more weeks to fully restore power service that Typhoon “Glenda” cut in these areas.

But residents of Metro Manila and other parts of the franchise area of Manila Electric Co. (Meralco) may get power earlier as the distributor’s network was not as badly hit as the provinces in southern Luzon.

Meralco aimed to restore 96 percent of its network by 10 p.m. Friday.

Energy Secretary Carlos Jericho Petilla said in a briefing that the main transmission lines in Luzon that were damaged by Glenda may be restored as early as July 19.

That would mean 10 to 50 percent of Quezon and the Bicol Region would be restored along with northern Luzon.

Meralco had to ration power on Thursday due to a lack of energy supply.

The country’s largest electricity distributor imposed three-hour rotating outages in portions of Manila, Pasay City, Makati City, Quezon City and Bulacan province—which are among the most economically active areas in the country.

The rotating brownouts were largely due to energy that could not be conveyed through typhoon-damaged transmission lines and facilities, some of which have been knocked down since Tuesday afternoon.

Alfredo S. Panlilio, Meralco SVP for customer retail services and corporate communication, assured the public that despite the rotating brownouts, vital installations such as the MRT and LRT, and hospitals would be kept online.

As of 5 p.m., 34.19 percent of Meralco’s franchise area was still experiencing outages. That translates to about 1.82 million customers.

More than half of the Luzon grid’s power supply on Thursday was either unavailable due to plant shutdown or could not be conveyed due to toppled transmission lines.

“About 55 percent of Luzon grid’s total dependable capacity is currently out,” Petilla said.

Most major power plants, which either shut down to prevent storm damage or got isolated due to damaged transmission lines, are expected to get back online Friday.

The 1,000-megawatt (MW) Santa Rita and the 500-MW San Lorenzo natural gas-fired power plants, however, are affected by flooding and are expected to be back online on Saturday, Petilla said.

National Grid Corp. of the Philippines (NGCP) said that on Thursday, the Luzon grid had a deficit of more than 500 MW with 4,244 MW total capacity and 4,760 MW demand.

NGCP officials said helicopter crews and ground crews were visiting affected areas and a full assessment should be completed Thursday.

Lopez-led First Gen Corp. disclosed to the Philippine Stock Exchange that its Santa Rita and San Lorenzo plants were on shutdown mode as a result of the typhoon, which severely battered Batangas City on Wednesday and caused flooding at the plant site.

Second, transmission assets must be restored to convey energy from power generation plants.

Third, electricity distributors like Meralco must clear debris that can affect their assets, reestablish fallen power poles and reenergize circuits.

These three are needed to ensure electricity supply to households.

Asked whether the energy industry could assure consumers they would have stable power supply at the household level by the end of the month, Petilla said, “What we can [say for sure] is this: People are working double shifts round the clock to restore power. Why?

“Two reasons. One, the business of electricity is basically dependent on consumers using electricity. Second, it is everybody’s obligation to make sure there will be electricity.”