But 230,000 customers in other franchise areas to remain without electricity
By: Kristine Angeli Sabillo - @KSabilloINQ
INQUIRER.net / 03:15 PM July 17, 2014 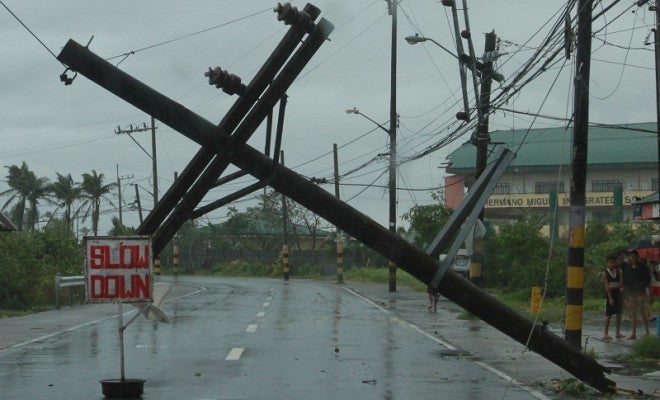 A powerline post destroyed by strong winds at the height of Supertyphoon Glenda in Noveleta, Cavite. EDWIN BACASMAS

MANILA, Philippines―Power will be fully restored in Metro Manila by Friday and only 4 percent will remain without electricity in other typhoon-ravaged franchise areas of the Manila Electric Co. by then,  Meralco senior vice president Alfredo Panlilio said Thursday.

“When will the full restoration (in Metro Manila) happen? Our estimate is by 10 p.m. tomorrow we’ll have all our circuits back into service,”  Panlilio said in a televised press conference at the National Grid Corporation of the Philippines (NGCP).

“(Franchise-wide) customers that will be affected will be 4 percent only or about 230,000 customers. Most of these will be coming from the south,” he said.

As of 9 a.m. on Thursday, 1.88 million or 35.3 percent of Meralco’s customers were still without electricity.

Of the franchise areas affected by typhoon “Glenda,” Quezon was the worst hit with 99.98 percent still without power.

Batangas was also badly affected with 94 percent of homes still plunged in darkness.

On the other hand, from more than 90 percent in Wednesday, customers experiencing power outages in Cavite and Laguna went down to 67 percent and 61 percent, respectively.

Electricity in Rizal was still 47 percent down, Metro Manila 17.99 percent and Bulacan 11 percent.

Panlilio said Meralco has deployed 3,500 people and almost 1,000 vehicles for the clean-up and repair of distribution facilities.