Wind gusts of up to 250 kilometers (155 miles) an hour ripped down trees, tore roofs off houses and overturned cars after Rammasun swept in from the Pacific Ocean on Tuesday night and hit the archipelago’s eastern islands. 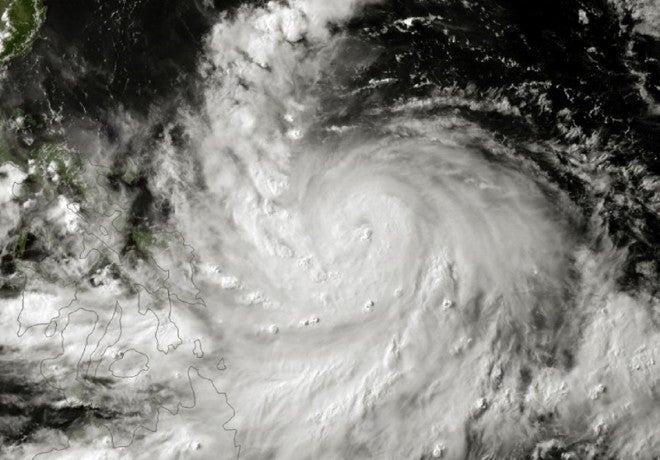 This National Oceanic and Atmospheric Administration (NOAA) image obtained July 15, 2014 and taken by the JMA MTSAT-2 satellite at 0730Z on July 14, 2014 shows Typhoon Rammasun. Tens of thousands of people in the Philippines sheltered in evacuation centres on July 15, 2014 as a typhoon began to pound its eastern coast, with authorities warning of giant storm surges and heavy floods. The eye of Typhoon Rammasun was set to strike Legazpi city in the eastern Bicol region in the early evening, with Manila and other heavily populated areas also expected to be hit early Wednesday, the state weather service said. “We are preparing for the worst,” said Rafaelito Alejandro, civil defence chief of Bicol, an impoverished farming and fishing region of 5.4 million people. More than 96,000 families have already moved to evacuation centres there, Social Welfare Minister Corazon Soliman told reporters in Manila. AFP PHOTO/NOAA/HANDOUT

“Roofing sheets are flying off the tops of houses here… the wind is whistling,” Joey Salceda, the governor of Albay province in the eastern Bicol region said over ABS-CBN television on Tuesday night.

One woman was killed on neighboring Samar island on Tuesday night when she was hit by an electricity post, the spokeswoman of the government’s disaster management council, Mina Marasigan, told AFP.

The National Disaster Risk Reduction and Management Council (NDRRMC) said Lourdes Ongray Lim, 25, was hit by a falling electric post in Allen, Northern Samar. Later Wednesday, the NDRRMC updated the number of fatalities to five. Besides the fatality from Northern Samar, one person was reported dead in Region 3 (Central Luzon) and three persons in Lucena City, Quezon province.

Two were reported injured–Antonio Habana, 16, and Jesus Vargas, 84, both from Sitio (settlement) Sta. Cruz in Nato village in Sagñay, Camarines Sur, who were electrically shocked. They were taken to Bicol Medical Center.

Three fishermen in the east were also reported missing.

With the typhoon still passing over the Philippines and many areas without electricity, the scale of the damage and potential number of fatalities was impossible to determine.

The eye of the storm just missed Manila, home to more than 12 million people, but giant winds still caused chaos in the city.

Power in many areas, including the business district of Makati, was cut just after dawn as branches were torn off trees and electricity lines snapped.

All government offices and schools were closed in Manila on Wednesday, with authorities urging people to stay indoors.

Across the country, about 450,000 people had fled their homes and sheltered in evacuation centers, according to Social Welfare Minister Corazon Soliman.

The NDRRMC also reported that 33,802 families, or 148,525 persons, from Mimaropa, Bicol Region and Eastern Visayas were sheltered in evacuation centers.

Glenda is the strongest typhoon to make landfall since Super Typhoon Yolanda (international name: Haiyan) ravaged Eastern Visayas eight months ago. The typhoon also hit an area north of where Yolanda struck, which prompted evacuations in Tacloban City in Leyte.

As of 8 p.m. Tuesday, there were 6,064 passengers stranded in various ports due to the typhoon.

In Leyte, several roads were also not passable:

According to the NDRRMC, 11 roads and one bridge were rendered impassable as of 6 a.m. Wednesday.

The typhoon prompted the suspension of classes and office work in several areas, as well. The presidential Palace earlier ordered the suspension of work in government offices in the National Capital Region, or Metro Manila, and in areas under Public Storm Warning Signal No. 2.

Glenda made landfall in Albay on Tuesday afternoon, but instead of weakening, it gained more strength as it traversed Ragay Gulf.

Rammasun, which is Thai for “God of Thunder,” was expected to move out into the South China Sea on Wednesday afternoon, then track towards southern China, according to the national weather service.

The Philippines is hit by about 20 major storms a year, many of them deadly. The Southeast Asian archipelago is often the first major landmass to be struck after storms build above the warm Pacific Ocean waters.

In November Super Typhoon Haiyan unleashed seven-meter (23-foot) high storm surges that devastated Samar and neighboring Leyte island, killing up to 7,300 people in one of the nation’s worst natural disasters.

Rammasun was the first typhoon to make landfall since this year’s rainy season began in June.

With the disaster of Yolanda (Haiyan) still haunting the nation, President Benigno Aquino stressed on Tuesday night that people in Rammasun’s path must be made to understand the dangers facing them.

“The objective has to be (to) minimize the casualties and the hardship of our people,” he told civil defense officials.