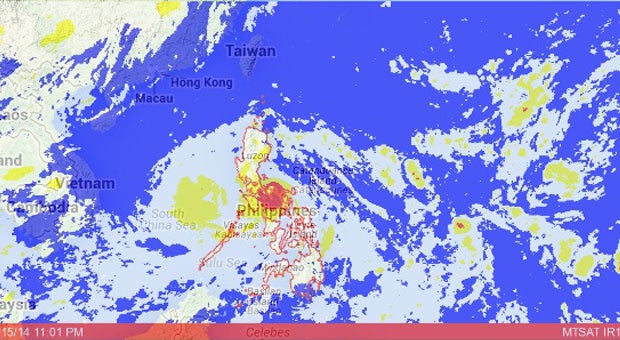 MANILA, Philippines—Typhoon Glenda (Rammasun) gained more strength as it crossed Ragay Gulf while on its way to Southern Quezon on Tuesday night.

The typhoon packed maximum sustained winds of 150 kilometers per hour near the center and gusts of up to 185 kph, the Philippine Atmospheric Geophysical and Astronomical Services Administration said.

Glenda was the strongest typhoon to make landfall eight months after Super Typhoon Yolanda (Haiyan). It made landfall in Albay on Tuesday afternoon.

Glenda was last observed 65 kilometers southeast of Alabat in Quezon. It maintained its speed of 19 kph.

The typhoon is expected to cross Metro Manila before noon Wednesday and exit the Luzon landmass through Zambales by Wednesday evening.

Storm surges of up to 3 meters are forecast in areas under Signal Nos. 2 and 3. 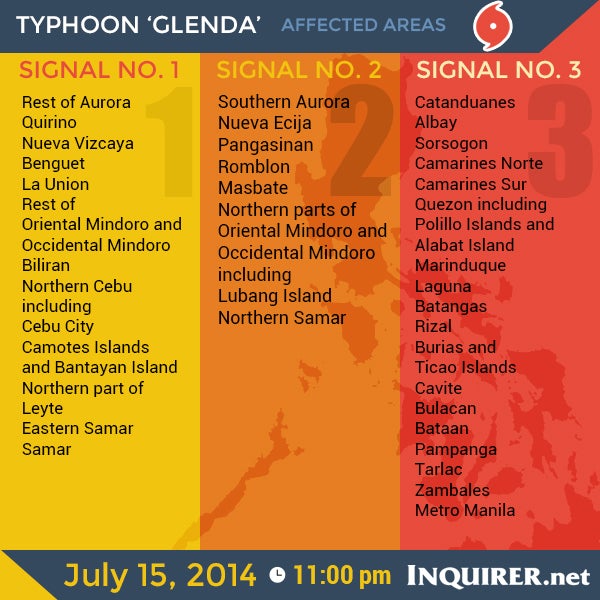 Read Next
In Dagupan, good governance is key
EDITORS' PICK
On Day 2 of implementation, gov’t says workers now exempt from ‘no vax, no ride’ policy
Over 3 Million worth of prizes to be won at Smart Padala’s SENDali Manalo Promo!
Acer starts the year off strong with the Aspire Vero National Geographic Edition
Gear up and get ready to play with Yamaha Mio Gear
Metro Manila posts lowest temperature yet this ‘amihan’ season at 19°C
DOH: 28,471 new COVID-19 cases in PH; active cases now 284,458
MOST READ
Cold-case investigation names surprise suspect in Anne Frank’s betrayal
Derek Ramsay on being married to Ellen Adarna: ‘Gumaan ‘yung mundo ko’
Czech anti-vax singer dies after deliberate infection
Emma Stone calls Andrew Garfield a ‘jerk’ after he ‘lied’ about his ‘Spider-Man: No Way Home’ appearance
Don't miss out on the latest news and information.