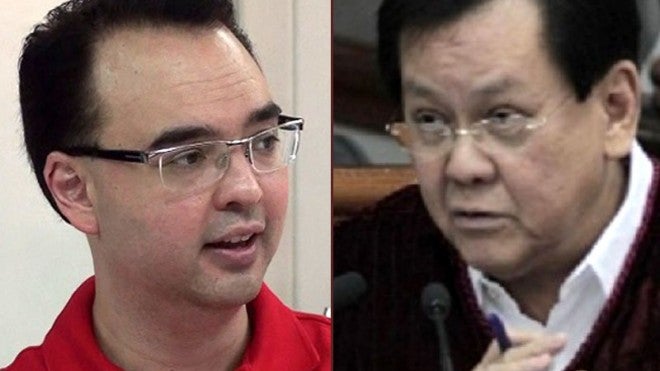 Although it lost the court battle over the Disbursement Acceleration Program (DAP), Malacañang should be glad: Democracy is at work.

This is proof that the system of checks and balances is working, Cayetano said.

“I welcome the decision of the Supreme Court. The decision brings forth many victories. Although Malacañang lost the battle, I think [it] won the war,” he said.

Principally, it’s a “victory” for checks and balances, he said.

Under a different administration, the Supreme Court might have glossed over the opposition to the DAP and upheld its constitutionality, Cayetano, the Senate majority leader, said.

“Malacañang lost in the sense that it was wrong to augment [a budgetary] item, or consider an unspent item as savings, and the Supreme Court is correct,” he said.

The Supreme Court last Tuesday struck down the DAP, including a circular allowing the release of savings from the executive department to agencies and projects outside the national budget approved by Congress.

The executive department pooled savings under the DAP, a stimulus program introduced in 2011, and allotted these for projects to speed up government spending and boost economic growth.

But the administration had been accused of giving additional pork barrel, out of the DAP savings, to 20 senators after the Senate convicted Chief Justice Renato Corona for dishonesty in his financial disclosures in May 2012.

Malacañang denied that the DAP releases were bribes.

The Department of Budget and Management (DBM) said  P136.75 billion had been made available in the 2011 and 2012 national budgets to fund high-impact projects under the DAP.

“The people know there’s no criminal intent. It was just to make matters more efficient. I would have done the same thing if it was I who was in Malacañang,” he said in an interview on dwIZ radio on Saturday.

Like some of his colleagues who recommended projects to be funded from the DAP, Osmeña said he could not return the money that was released by the DBM, as the money went straight to the projects.

Whether the DAP fund ended up in the projects recommended by the senators could be determined by the Commission on Audit, he said.

“We never realized it would be declared unconstitutional,” he said.

Cayetano advised individuals and groups planning to file an impeachment complaint against the President over the DAP debacle to seriously study the matter.

“If the President is impeached, who will benefit? Won’t that be VP Binay?” he said, referring to Vice President Jejomar Binay.

Cayetano: No to VP bid, for president…someday

Who will benefit most if Aquino is impeached? Cayetano has answer