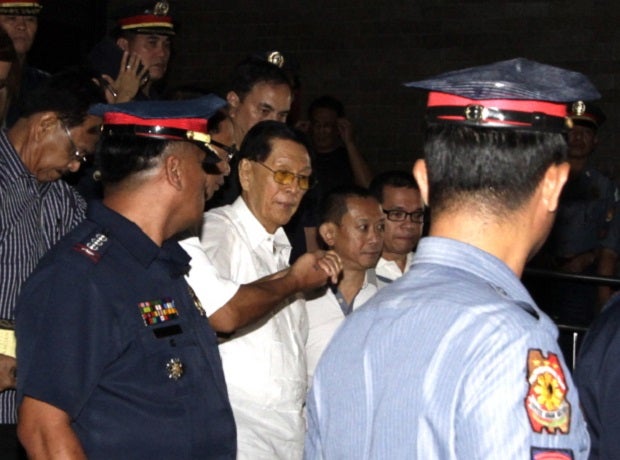 Senator Juan Ponce Enrile at Camp Crame on the way to the PNP Hospital. The Sandiganbayan has ordered Enrile’s arrest in connection with the plunder and graft cases filed by the Ombudsman.  LEO SABANGAN/INQUIRER

Unlike the show-biz atmosphere that surrounded the arrest of Senators Bong Revilla and Jinggoy Estrada last month, the detention of Sen. Juan Ponce Enrile on plunder and graft charges over the P10-billion pork barrel scam is turning out to be a private affair.

“Upon request of [Senator Enrile’s] family through their lawyers, we will not be releasing mug shots and all other updates to the public or the media,” Sindac said in a text message on Saturday.

Unlike the families of movie actors Revilla and Estrada who talked with journalists and brought fiesta food and celebrity visitors into the PNP Custodial Center, Enrile’s children, Katrina and former Cagayan Rep. Jack Enrile, shunned interviews with reporters when they visited him at the PNP General Hospital after his eye checkup in Makati City on Saturday morning.

Police officials and the camps of Revilla and Estrada gave information about the two senators’ detention at the Custodial Center, leading to stories about rats and cockroaches in the lawmakers’ cells and to all-night partying that have proven true, as the carousing has drawn a well-reported mass protest from at least 58 detainees at the PNP.

But even prisoners have a right to privacy, and the PNP, by approving the family’s request, is apparently respecting Enrile’s.

De la Cruz said the senator’s son Jack had been designated spokesperson for the family.

Before 7 a.m. Saturday, the authorities took Enrile from the PNP General Hospital in Camp Crame, Quezon City, to Asian Eye Institute in Makati City for an eye checkup.

“This is done whenever there’s a need for it. Otherwise, I’ll go blind,” Enrile said in a brief television interview.

Enrile is suffering from age-related macular degeneration in the right eye. He needs regular treatment to prevent loss of vision in that eye.

Enrile thanked the police for the courteous treatment they are giving him.

“I thank the police for treating me very kindly,” he said.

Jack Enrile told a television interview last Friday night that the family was deferring to the lawyers on a decision to move his father to another hospital.

“I don’t know what his legal team’s plans are. Maybe tomorrow, or another day, he can be transferred to another hospital. But we leave it up to the legal team to decide on that, as well as to the wisdom of the court,” he said.

Enrile’s lawyer Joseph Sagandoy said the PNP General Hospital was “better” than the bungalow at the Custodial Center.

“Yes, it would appear that his temporary hospital detention is better for him because of the immediate availability of medical facilities and personnel,” Sagandoy said in a text message.

Sagandoy said, however, that Enrile’s stay in the hospital was only “temporary.”

“We will file the appropriate motion depending on the recommendation of his doctors. It will be the court that will finally decide on the matter,” he said. “We will decide on that next week.”

Sagandoy said he was not aware of any agreement between the Enrile camp and the PNP for the senator to be held in a hospital.

Enrile, Revilla and Estrada are the principal accused in the pork barrel scam, an elaborate scheme to embezzle billions of pesos from the Priority Development Assistance Fund (PDAF) allegedly masterminded by businesswoman Janet Lim-Napoles.

Enrile is accused of pocketing P174 million, Revilla P224.5 million and Estrada P183.7 million in kickbacks from PDAF-funded, phantom projects allegedly hatched by Napoles over a period of 10 years up to 2012.

Napoles has been under police custody since Aug. 28, but on a separate charge of serious illegal detention brought by Benhur Luy, the principal witness in the pork barrel scam cases.

Also ordered arrested on plunder charges last Friday was Enrile’s former chief of staff, lawyer Jessica Lucila “Gigi” Reyes, the so-called 24th senator because of her influence in the chamber when Enrile was president of the 15th Senate, which had 23 members. The 16th Senate, which sat in July last year, has the full membership of 24.

Reyes is held in the detention cell in the basement of the Sandiganbayan building. The court may order her transfer to  Camp Karingal in Quezon City on Monday.

Why not at Camp Crame?

It remains unclear why Reyes is being held elsewhere when the police have said that the fourth room in the four-room, newly renovated detention bungalow at the PNP Custodial Center has been prepared for a female detainee.

That could only be Reyes, who returned to the Philippines, after fleeing to another country last year, to face the charges against her.

Another female accused, Pauline Labayen, a member of Estrada’s staff, has been out of the country before the hold departure orders were issued by the justice department.

Enrile thanks PNP for kind treatment

With no fan or aircon in jail, Gigi Reyes breaks down—source