‘Sorry, senator, but this is not a five-star hotel’ | Inquirer News
Close
menu
search

‘Sorry, senator, but this is not a five-star hotel’ 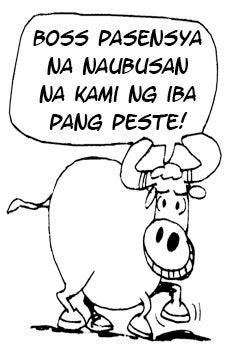 MANILA, Philippines–So what’s wrong with having cockroaches and rats inside jail?

Some officials of the Philippine National Police on Sunday sneered at relatives and friends of Sen. Bong Revilla for raising a fuss over the crawling pests and other unwanted “guests” inside his detention cell at Camp Crame.

“Senator Revilla is not on vacation at Camp Crame. Spending time in detention is not supposed to be like a hotel accommodation,” a senior police officer, who agreed to talk on condition of anonymity, told the Inquirer.

“Although he is an elected official, he is accused of committing a crime. The presence of [bugs] and other crawling insects inside his detention cell should be the least of their concerns,” the officer said.

“We admit we are having pest problems at the Custodial Center. [We will address this concern] with pest control measures,” Sindac said.

Revilla’s wife, Cavite Rep. Lani Mercado, and lawyer and family friend Salvador Panelo told reporters on Saturday that they saw cockroaches and rats at the senator’s detention cell at the PNP Custodial Center.

They also complained about the lack of ventilation in the 32-square-meter room which, they said, could pose health risks to Revilla.

Another PNP official, who asked not to be identified for lack of authority to speak to the media, admitted that the searing heat inside Revilla’s detention room could be unbearable during daytime and may even cause a headache.

Since his arrest on Friday, Revilla has been occupying the first room of the newly built four-room bungalow inside the high-security detention compound.

“But he can still consider himself lucky,” the second source said. “That building was intended to be the barracks of the officials of the Custodial Center who are forced to stay in an old and dilapidated building.”

The PNP official also disclosed that Revilla had been refusing to eat the food rationed to detainees since he was brought to the detention facility.

Instead, he said, the senator had been eating the food brought in by his wife, his siblings and close friends.

“While he has the right to decline the food we give him, Senator Revilla should also understand that the PNP is using public funds for the food ration of detainees like him,” he said.

“We also brought grilled liempo. But he didn’t touch it because he’s avoiding foods which are high in cholesterol and uric acid,” Revilla’s son said.

The family, he said, had leche flan (custard) for dessert.

“We bring him food so that at least he can feel our presence. Our family and some friends have agreed who among us would bring him food for breakfast, lunch and dinner,” Bryan said.

“If he eats foods which are high in uric acid, he may not be able to walk. That’s why we keep him on a healthy diet,” he added.

‘As big as a kitten’

Bryan also confirmed that there were “many” cockroaches and rats inside his father’s cell.

Asked if mosquitoes were also causing problems for his father at night, he said: “It’s OK. He has [insecticide] inside.”

He said the visitors saw a rat “as big as a kitten” outside the detention facility’s visitor’s lounge, where the family held a Bible fellowship led by actor-turned-Christian pastor Chinkee Tan.

“But the rat has been captured. We were told it was already brought to the detention room of Tito Jinggoy,” he said in jest, referring to Sen. Jinggoy Estrada, his father’s close friend and coaccused in the P10-billion pork barrel scam.

Besides Revilla and Estrada, opposition Sen. Juan Ponce Enrile and 51 others have been charged with plunder and graft for allegedly funneling billions of pesos of Priority Development Assistance Fund to ghost projects of bogus nongovernment organizations of detained businesswoman Janet Lim-Napoles.

Revilla’s former chief of staff, lawyer Richard Cambe, who also surrendered to the Sandiganbayan on Friday, is also held at Camp Crame. He is staying in 9-square-meter cell.