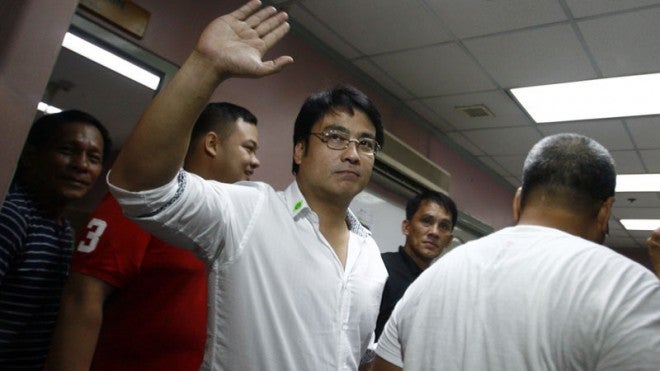 MANILA, Philippines–Sen. Bong Revilla spent his first Sunday as a jailbird in Bible fellowship with his family.

His wheelchair-bound father, former Sen. Ramon Revilla Sr., arrived around 11 a.m. and stayed at the Custodial Center of the Philippine National Police at Camp Crame for about two hours.

Actors Phillip Salvador and Jimmy Santos also visited Revilla, who made a name for himself as an action movie star like his father.

“I’m OK. I can handle this,” Bryan Revilla, the senator’s oldest son, quoted his father as telling him during the family visit.

“He said he would suddenly wake up at night and be startled on realizing that he’s not sleeping at home,” Bryan told reporters.

“After that, he said he just goes back to sleep,” he continued.

During the religious service, Bryan said his father thanked their relatives for praying for him and for their unwavering support for him.

He said his father had been joining their family in going to Christian services and Bible studies every Sunday.

“The Sunday service was very peaceful. It was very uplifting,” Bryan said.

He said his father was keeping himself busy by reading books and by sweeping and watering the concrete floor outside his detention room.

While they were trying to put up a brave front, Bryan admitted their family had been hurt by criticisms on social media, particularly by insinuations that his father was being given special treatment by the police.

He said their relatives were trying “to keep everything positive” amid the biggest challenge to be faced by the family.

“It really hurts, I must admit. Even though we say that we’re not affected, deep inside it hurts. It really does hurt,” he said.

He said he himself had been receiving hate mail, but he had been ignoring them “because I don’t want to let anger take control of me.”

As to his family’s bashers, Bryan said: “We might as well pray for them. If they were offended or hurt, I’m sorry.”

As agreed, he said Revilla’s family and friends were allowed to visit him only from 9 a.m. to 3 p.m. every Thursday and Sunday.

“As a matter of policy, the families of the detainees may choose two days every week to see their loved ones. We are doing this because the visitors’ lounge of the Custodial Center can handle only a small number of people,” Sindac told reporters.

He said Andrea Revilla, the senator’s sister and wife of Antipolo City Mayor Junjun Ynares, was allowed to bring in food for her brother beyond the allowed visiting period last Saturday “because the family was still adjusting to the situation.”

“But starting Sunday, the rules and policies of the Custodial Center will be strictly implemented,” he said.

Sindac said two employees of the PNP Health Service went to the Custodial Center at around 4 a.m. Sunday when Revilla complained of headache caused by migraine.