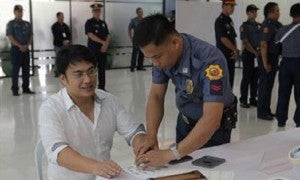 MANILA, Philippines – As the beleaguered Senator Ramon Revilla Jr. spent his first Sunday in detention, he drew a huge boost of support from the Senior himself.

Ramon Revilla Sr., the patriarch of the Revilla clan, paid a visit to his son who is detained at the Philippine National Police Custodial Center in Camp Crame.

Revilla was ordered detained for his involvement in the Priority Development Assistance Fund scam. He was charged with plunder for allegedly receiving hundreds of millions of pesos in kickbacks from businesswoman Janet Lim-Napoles who skimmed the money from government allocations for the poor.

The actor-turned politician denied any role in the scam.

Plunder carries a maximum sentence of life imprisonment and is non-bailable.

As his first Sunday in detention, Revilla Jr. was treated to a morning Bible study with his family and close friends while they feasted during lunch, Chief Superintendent Reuben Theodore Sindac, PNP Public Information Office Chief, said.
Congresswoman Lani Mercado brought with her two boxes of cakes and other food stuffs while friend Jimmy Santos was the first to visit Revilla.

Sons Jolo and Bryan were also present for the pseudo family reunion.

Together with his friends and family, Revilla Jr. had a bible study in the morning and ate lunch after.

In a happy and peaceful atmosphere, the senator preferred the grill fish which, as his son said, was his favorite and a little of the grilled pork belly.

Sindac said that Revilla Jr. was in a “fairly good” condition. However, the detained senator had complained of migraines due to the humidity in his cell.
He added that Revilla Jr. went to sleep at 10:30 Saturday evening and experienced migraines at 4 a.m. Sunday early morning.

Doctors and nurses from the PNP Health Service rushed to Revilla’s aid and provided medication.

A single ceiling fan provided relief from the heat as family members pushed for an air cooler and some indoor plants to be put in Revilla Jr.’s cell.

“It still has to undergo court proceedings, which would open tomorrow (Monday),” Sindac said.

Son Bryan said that his father still gets a fair share of exercise in the small cell.

“What he does is sweep the floor and water the ground to lessen the heat,” the young Revilla said.
Visitation

Sindac said that even though visiting hours for Revilla were only from 9 a.m. to 3 p.m. for Thursday and Sunday, food from the family can be delivered anytime of the week.

Also, Revilla is only allowed a maximum 30 visitors as it is the capacity of the visitor’s sector of the Custodial Center.

Revilla’s visitors are only allowed to enter the visitor’s sector and are barred from entering the actual detention cell.

According to Bryan, they wish they could have more days, though they are happy with what the PNP has given them.

He added that Revilla’s room is not a detention cell, rather it was supposed to be an officer’s quarters of the PNP Custodial Center.

Camp Crame is undergoing building renovations and the supposed officer’s quarters were hastily transformed into a detention cell to accommodate Revilla.

“This wasn’t designed as a detention cell, this would only be used temporarily,” Sindac said as the Sandiganbayan would decide where to permanently detain Revilla.

He added that steel bars were added to turn the quarters into a makeshift detention cell.

Rat race
Sindac added that they would address the cockroach and rat infestation that plagued Revilla’s quarters.

He inferred that the pests probably came out when the renovation began.

“We will try to do some pesticide work,” Sindac said.

Bryan said that the rats were almost as big as kittens and, with a joking sigh of relief, said that some were already captured.

He was not, however, sure if his father had a hand in baiting the vermin.